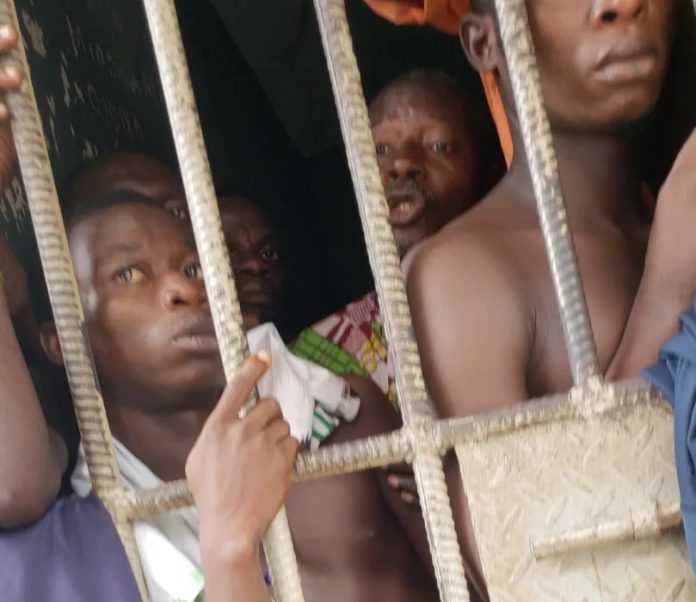 A visit to several police detention centers in Nigeria’s federal capital, Abuja, reveals an eyesore that police officers claim is characteristic of police stations across the region.

Yunusa Agali and nine others have been detained by police in Abuja following their detention on March 26 and 27 for robbery and stealing.

The ten of them have now been held for over a month in an infamous prison centre known as the ‘Human Abattoir,’ which was used by the defunct Special Anti-Robbery Squad (SARS) and other police operational units.

The police have denied them judicial parole, claiming that the offense is not bailable.

The police were supposed to promptly prefer charges against them and arraign them before a court of competent jurisdiction.

The Nigerian Constitution provides that no suspect can be held in custody for more than 48 hours for any reason. Suspects should either be released on bail or arraigned in court within the stipulated period.

The suspects could not be arraigned because courts across the country have been shut down since April 6 due to a strike by the Judiciary Staff Union of Nigeria (JUSUN).
“All the odds are against a suspect at this time. You are completely at the mercy of the police and other arresting authorities, who have earned a reason to keep suspects in custody as long as they wish.

Another crime suspect, Usman Maidabo from Bauchi State who was arrested on April 13 by the police and remanded at the SWAT detention facility at Area 3 in Abuja, over alleged disappearance of seven persons, has not been able to secure his bail.

Sure of his innocence, Mr Maidabo, the leader of a vigilante group in Nabardo, Bauchi State, travelled down to Abuja on April 13 to submit himself for police interrogation.

But since then, his situation has remained like that of Mr Agali and the nine others.

The situation of prolonged detention of crime suspects due to the lingering strike action by judiciary workers is not peculiar to the police, as the State Security Service (SSS) is equally involved.

In a letter dated March 22, 2021, Rickey Tarfa, a lawyer to some members of bureau de change operators who were nabbed by operatives of the service on allegations of terrorism financing, threatened to sue the agency over the continued incarceration of his clients.

“The fact of their continued detention for about two weeks now without being charged to court or released on administrative bail is a negation of the extant provisions of Section 35 of the 1999 Constitution of the Federal Republic of Nigeria (as amended),” Mr Tarfa, a Senior Advocate of Nigeria, said in his letter addressed to the Director-General of the SSS.

But Mr Tarfa has not been able to make good his threat to take legal action for the release of his clients while the security service continues to hold on to them.

In a letter dated March 22, 2021, Rickey Tarfa, a lawyer to some members of bureau de change operators who were nabbed by operatives of the service on allegations of terrorism financing, threatened to sue the agency over the continued incarceration of his clients.

“The fact of their continued detention for about two weeks now without being charged to court or released on administrative bail is a negation of the extant provisions of Section 35 of the 1999 Constitution of the Federal Republic of Nigeria (as amended),” Mr Tarfa, a Senior Advocate of Nigeria, said in his letter addressed to the Director-General of the SSS.

But Mr Tarfa has not been able to make good his threat to take legal action for the release of his clients while the security service continues to hold on to them.

The situation at many police detention centres has worsened since the ongoing JUSUN strike began.

This reporter had the opportunity to join a monitoring team dispatched by the Administration of Criminal Justice Monitoring Committee (ACJMC) to tour some police detention facilities within the Federal Capital Territory (FCT), Abuja, on April 27.

At the Police Divisional Headquarters at Nyanya, a suburb of Abuja, the detention facility was brimming with suspects and was an eyesore.

Although the facility was monitored under strict supervision of police officers with the visitors barred from going in with phones or cameras, dozens of suspects were seen screaming from their crammed cells overlooking the facility’s hallway.

On one occasion, they were seen surging towards the divisional police officer (DPO) as he crossed into another office in the building.

Even if one were visually impaired, the pungent smell oozing from the cells was enough to tell of an overcrowded detention facility calling for decongestion.

The situation was equally chaotic at the Kabusa police station, Apo in Abuja located in a densely populated area with low-income earners.

The police had in the wake of the JUSUN strike directed its divisions and formations to avoid unnecessary detention of suspects.

But despite this, police officers who spoke with our correspondent painted a picture of a widespread congestion of police detention facilities across the country.

In a telephone conversation with our correspondent, the officer in charge of the legal department of the FCT police command, James Idachaba, said police detention facilities were overcrowded with crime suspects due to the closure of the courts.

“Well, the negative impacts of the ongoing strike by judiciary workers on police detention facilities cannot be over-emphasized. You know police activity is 24 hours of every day; since we cannot stop our operations by way of arrest and investigation,” he said.

As an interim solution to the problem, Mr Idachaba said the Inspector-General of Police, Usman Alkali, directed that only suspects arrested for serious offenses should be detained.

“So, what we are trying to do is to comply with the Inspector General of Police’s and Commissioner of Police, FCT’s directive that only suspects with serious offenses like kidnapping, violent crimes like armed robbery, culpable homicide, rape and the likes are to be detained because we don’t have the power to release those ones on bail,” he said.

Police officers also told the ACJMC team during the tour of the detention facilities in Abuja that they collaborate with nominal complainants to resolve minor offences such as theft by granting bail to suspects.

They said that they transfer crime suspects in violent crimes such as armed robbery, culpable homicide and kidnapping to detention facilities of the FCID, which is located at Area 10 in Abuja.

Suggesting that the current worrisome state of many detention centres would likely remain till the end of the ongoing strike, Mr Idachaba said, “We have no other option but to continue to keep them until the courts open for the purpose of proper prosecutorial procedures.”

“Suspects with minor offences are not in our facilities; as soon as the preliminary processes are done, they are granted bail.”

Another police prosecuting lawyer, Oladiran Ayodele, who is based in Lagos, shared Mr Idachaba’s concerns about the overflowing police cells in different parts of the country.

He pointed out that crime suspects cannot be held beyond 48 hours without being charged to court as provided in the 1999 Constitution of Nigeria, except for capital offenses where a court order would be required to further keep a suspect for the purposes of investigation.

Speaking on the prolonged strike, Mr Ayodele said it had brought Nigeria’s criminal justice system to a standstill with the attendant effects being criminals roaming the streets freely.

“The danger in all of this is that criminals roaming the streets freely, because if we (police) arrest them, we cannot charge them to court within the stipulated time by the constitution as a result of the court shutdown,” he said.

He added that the situation has led to an increase in crime rate across the country.

“For instance, since the strike commenced, someone was defrauded of N3 million, and the alleged fraudster switched off his phones. We want to get the person arrested and also get an order from the court to freeze the person’s account. But with the court closure, it would give the criminal the opportunity to squander the money, the proceeds of crime. It is a serious issue,” he said.

He explained that the strike has forced on the police a situation whereby suspected criminals are being released without facing charges.

“The effect the JUSUN strike has had on police detention facilities is that the constitution is very clear; you cannot detain someone for more than 48 hours at most, depending on the distance of the court from the detention centre. If the distance of the court is within one kilometre, then you can only detain a suspect for only 24 hours. However, a reason the police would detain a crime suspect for more than 48 hours is if the person committed a capital offence such as armed robbery, murder and so on.

“So, once suspects are arrested, they are granted bail because courts are not open; the doors of our courts are locked. So, our reason for detaining is to charge suspects to court if they are found to be culpable of the offence. Now, the strike action has affected Nigeria’s criminal justice system. Criminals are walking the streets freely and committing more crimes.”

Speaking with this reporter, the 1st Vice President of the Nigerian Bar Association (NBA), John Aikpopo-Martins, who is the co-chair of the Human Rights Committee of the body of Nigerian lawyers, said the association had yet to monitor congestion at police stations across the country.

“We have not directed our members to monitor the prisons and other detention facilities. However, the NBA leadership will direct members to monitor police stations across the country with a view to rendering pro bono (free legal services),” he said.

Days after speaking with our reporter, the NBA Human Rights Committee chaired by Mike Ozekhome, a Senior Advocate of Nigeria, directed its members to regularly visit police stations to see suspects detained for minor offences were granted bail.

The directive was contained in a memo signed by the committee’s secretary, Bernard Onigah, and addressed to all NBA chairmen and vice-chairmen.

“You should intervene and ensure that suspects involved in minor offences and petty crimes are granted bail on liberal terms, pending the calling off of strike by JUSUN,” the memo dated April 28 read in part.

“You should work closely with the Divisional Police Officers and police counsel to ensure the protection of the fundamental human rights of Nigerians and also provide advice to the police when necessary and needed.

“This exercise is to continue throughout the duration of the strike as further directed by the chairman,” it added.

After a meeting with the Chief Justice of Nigeria (CJN), Tanko Muhammad, last week, JUSUN vowed to continue the strike until its demands are met.