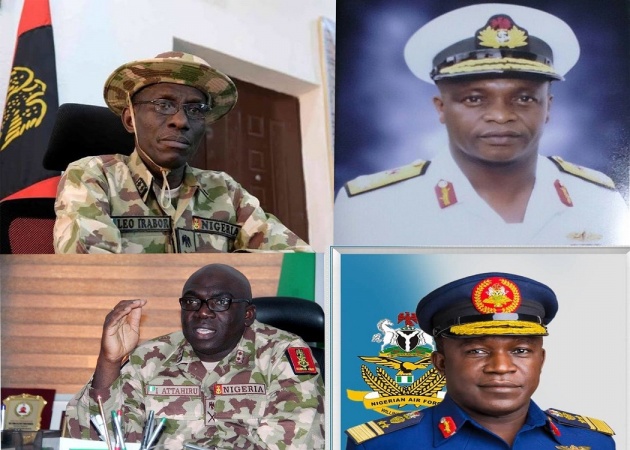 The new Chief of Defence Staff, Major-General Leo Irabor, has  assured Nigerians that the security challenges currently ravaging the country will soon be a thing of the past.

Irabor gave the assurance, on Wednesday, after the newly appointed service chiefs met with President Muhammadu Buhari, at the Presidential Villa, Abuja.

The  chief of defence staff, who spoke on behalf of the newly appointed service chiefs while addressing State House Correspondents on the meeting with president Buhari, said:  “The message from the president is that we, knowing the current security environment, must do everything possible to add value to the security disposition and the expectations are high; and we are quite mindful of that expectations, so, we collectively, will work to achieve that.”

He added: “We we can only, at this stage, pledge our utmost best to bring safety and security to lives and properties across the country.”

Asked what he would assure the nation, the CDS said: “On behalf of the service chiefs, I am assuring the nation peace and security; we believe there will be added value to the security disposition of the nation.”

President Buhari had told the new service chiefs that Nigeria was in a state of emergency, following the myriads of security challenges across the country.

The president, therefore, charged the new service chiefs to be patriotic and serve the country well.

In a statement by his Special Adviser on Media and Publicity, Femi Adesina, Buhari said: “We’re in a state of emergency. Be patriotic, serve the country well, as your loyalty is to the country.

“There’s nothing I can tell you about the service, because you are in it. I was also in it, and I will pray for you. I also assure you that whatever I can do as Commander-in-Chief will be done, so that the people will appreciate your efforts.

The president also charged the service chiefs to be concerned about the morale of their officers and men, saying they should be made to feel physically and professionally secure. He pledged that government would do its best in terms of equipment and logistics.

President Buhari, on Tuesday, accepted the resignation of the former service chiefs and appointed new ones.

Also in the meeting was the Chief of Staff to the President, Prof. Ibrahim Gambari and the Minister of Defence Major-General Bashir Magashi (retd).