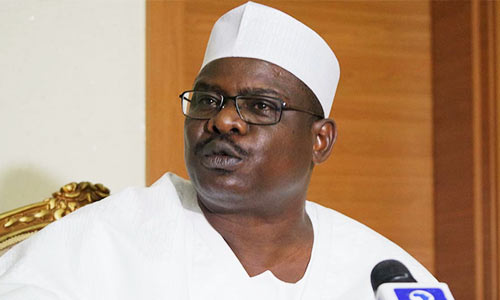 **Urges Other Security Agencies to Support the Army

***Says Some people from Chibok want to relocate

Chairman, Senate Committee on Army, Senator Ali Ndume, All Progressives Congress, APC,  Borno South has condoled with the Army over the killing of Brigadier General Zirkusu and three other Soldiers during an attack by Islamic State West Africa Province (ISWAP) militants in Borno State.

Speaking with Journalists yesterday in Abuja, Ndume who condemned the action in very strong terms, appealed to the military troops presently in Borno not to allow their morale to be reduced following the killing of some of them by members of the deadly Boko Haram sect.The former Senate leader who urged other Security agencies to support the Military in the fight against the terrorists said that against the backdrop of what happened, some indigenes of Chibok are already planning to relocate to Mubi in Adamawa state for safety.

General Zirkusu and other soldiers were reportedly killed on Saturday in the incident which occurred at Bulguma, a few kilometres from Askira town in Askira Uba Local Government Area of Borno State.According to the Army, the troops of Joint Task Force, North East, ‘Operation Hadin Kai’, were engaged in a fierce gun battle with the terrorists which also led to the death of three other soldiers.

Senator Ndume said, “I want to express my condolences to the Nigerian Army over the death of the General who died along Chibok road. ISWAP terrorists attacked a town there. They know that the General was the major obstacle to their operation.“They laid an ambush and rammed a bomb-ladened car into his vehicle. He was a gallant soldier. He took the fight to the terrorists. His death has sent panic to people in that area. I am aware that some people around that Chibok area have started thinking of relocating. Some want to go to Mubi and other places. We are trying to urge them to remain there. The insurgency is coming to an end.

“This is not the end, but the beginning of the end of terrorists. I know that the Army has what it takes to take the fight to them. There is a need to urge other security agencies to give the Army the needed support. We also need to urge vigilante groups to assist them.

“For now, we will assume that it was an isolated case. But the intensity with which they came is worrisome. They came with more than 10 gun trucks. They are also regrouping around Borno North. That’s the Lake Chad axis. The Military is aware and the Air Force is providing surveillance in the area. It was a revenge mission. The Army has been taking out key ISWAP commanders and they had their revenge.

“Last week, for instance, they abducted relatives of the Emir of Askira. They also abducted some passengers along that road. If the Army sustains the temple, we will win this insurgency.”

On additional equipment for the military, Ndume said, “The equipment is arriving gradually. We are monitoring. As a committee, we will go and see what has been brought into the country. This is an improvement. The Army is very rapid in responding. The Army is involved in about 33 states now. They’re under pressure.”