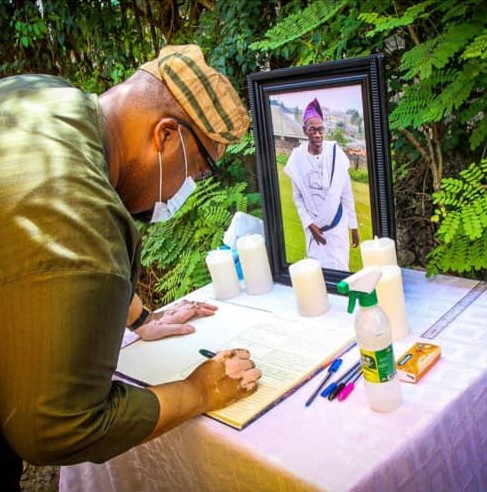 The NBA President, Mr. Olumide Akpata, today in Ibadan paid glowing tribute to foremost Lawyer and Patron of NBA Ibadan Branch, Late Pa Emmanuel Abiodun who passed away on the 23rd of December, 2020.

Mr. Akpata who was at the residence of the late Bar Leader on a condolence visit to the family, described him as a true role model who practiced what he preached and set a great example for younger members of the Bar to follow.

Recalling his last meeting with Pa Abiodun at the recently concluded NBA Ibadan 2020 Law Week, the NBA President noted that his sudden demise came as a rude shock to all and that he would be sorely missed.

Responding on behalf of the family, Ms. Folake Abiodun, the eldest daughter of the deceased, thanked the NBA President for taking time out to visit and condole with the family during their time of bereavement. She stated that her father’s commitment to the NBA and legal profession at large was legendary and that the outpouring of love and support from the legal community since his passing, had been a source of great comfort to the family. Ms. Abiodun then informed the President that funeral arrangements for her late father would be announced shortly.

Dr. Monday Ubani: OBJECTION FOR THE CONFIRMATION OF LAURETTA ONOCHIE AS INEC COMMISSIONER.