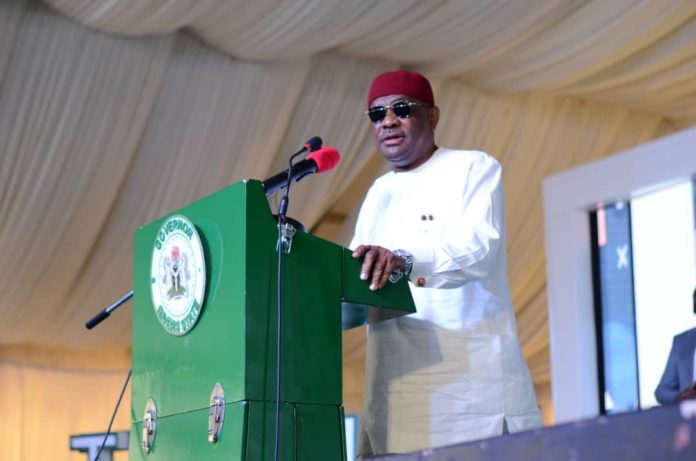 The first step towards ‘Taking the Lead’ in the re-ordering of the Nigerian society must begin from within.
That was the charge laid by Rivers State Governor, Barrister Nyesom Wike, CON, during the opening ceremonies of the ongoing 61st Annual General Conference of the Nigerian Bar Association (NBA) in Port Harcourt.

In a typically fiery, no-holds-barred address to delegates, he lamented that the NBA is not what it used to be in the quest for the enthronement of democracy and social justice, and in the advocacy for the rule of law and respect for human rights. It is time, he said, for the body to transform itself into an activist force that displays zero tolerance towards bad governance and attempts – especially by the powerful – to politicize the dispensation of justice in Nigeria. On the state of the nation today, Wike said Nigeria had never been so badly governed as in the last six years, with almost every index of socio-economic development (and especially in security and general welfare) pointing downward – a situation which, he said, calls on the NBA to stand up and be counted, using law as an instrument not just of social control, but of social development and progress.

On his administration’s part, the Governor reeled out the various contributions it has made in strengthening the administration of justice in his state – including hosting NBA Conferences and improving the working conditions of Judges, Magistrates and other judicial officers, as well as the provision of infrastructure and logistics to enable them to do their work in an effective and timely manner. He also reiterated his government’s commitment towards improving the quality of legal education in the country by citing its immense contribution towards the development of the Nigerian Law School Campus in Yenagoa, Bayelsa State and the proposed Nabo Graham-Douglas Campus of the Nigerian Law School in Port Harcourt.