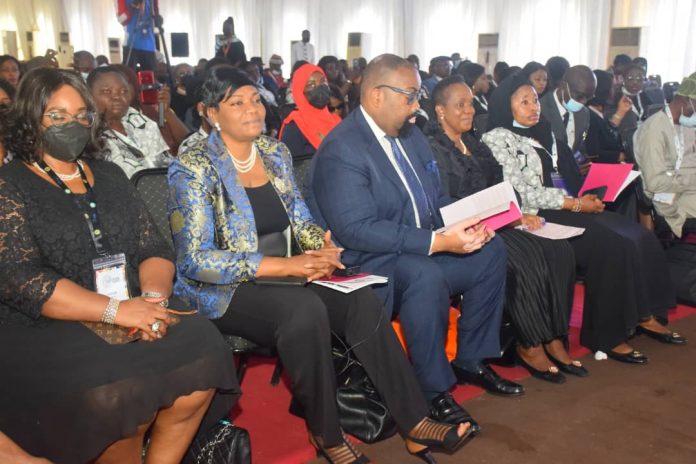 The traumatic effect of harassment and victimization on the basis of gender – as well as ethnic or racial or religious background – is all too real. Not only is it real, it exists on a primary as well as secondary level, both of which reinforce one another to devastating effect. To female lawyers – and to an extent, young wigs of both genders – the workplace can sometimes feel like a minefield, full of subtle dangers and overt threats. How to detect this tendency – especially among bosses, senior officers and colleagues, etc. – and what responses constitute the most effective form of deterrence against future occurrence, was the subject of an intense and emotive breakout session at the 2021 Annual General Conference of the Nigerian Bar Association (NBA) in Port Harcourt, Rivers State.
Organized under the aegis of the Association’s Women Forum (NBA-WF) the session on ‘Workplace and Professional Harassment’ identified a secondary trauma that worsens and reinforces the first, namely, the culture of silence that conspires to ensure that the perpetrator of abuse – even when properly identified – goes un-sanctioned and even emboldened to keep perpetrating such actions; denial; shaming (and blaming) the victims as perhaps having provoked the act of abuse (if not actually inviting it). Apart from these levels of trauma, the respective panelists on the session agreed, there is also the real danger of mental breakdown and suicidal attitudes and actions.

Moderated by Derin Fagbure, Principal Partner at the firm of In Black & White LP, the session also benefited from the insights of Oludolapo Makinde; a PhD student at the University of British Columbia in Canada; Titilayo Giwa, Company Secretary and Head of Legal at Ripen Marine Contractors Limited; Itoro Eze-Anaba, Managing Partner and Co-Founder at the Mirabel Centre; Olaoluwa Oni, author of yNBA; and the only male on the panel, Kunle Ajagbe, who is the Managing Partner at Aidan Partners.

The panelists advocated, among other things, the prompt reporting of such harassment to the appropriate authorities; empowerment for actual (and potential) victims of abuse and harassment; a clear message from the powers that be in the organisation that there is an unambiguous policy of zero-tolerance, not just towards overt acts of harassment but also the environment that nurtures it (such as sexist remarks, lewd jokes; sexually charged situations, etc.); and the promotion of a culture of patriarchy and male chauvinism in respective firms and the profession in general.

On this last point, Mr. Ajagbe used the opportunity to call for an end to the practice that affirms that there are ‘no ladies’ at the Bar, and of using the male pronouns such as ‘he’, and ‘his’ and phrases like ‘brother Judges’ to refer to female jurists. To Ajagbe, this practice is an anachronism that seems to reinforce a form of patriarchy as it suggests that the appearance (if not the substance) of maleness confirms some form of validation on the office of a Judge or Justice and its female occupant.

CONTINUATION OF THE NBA-ICLE 6-DAY TRAINING ON THE LEGAL ASPECTS OF FINANCE – OVERVIEW, ISSUES AND DOCUMENTATION: DAY 2.