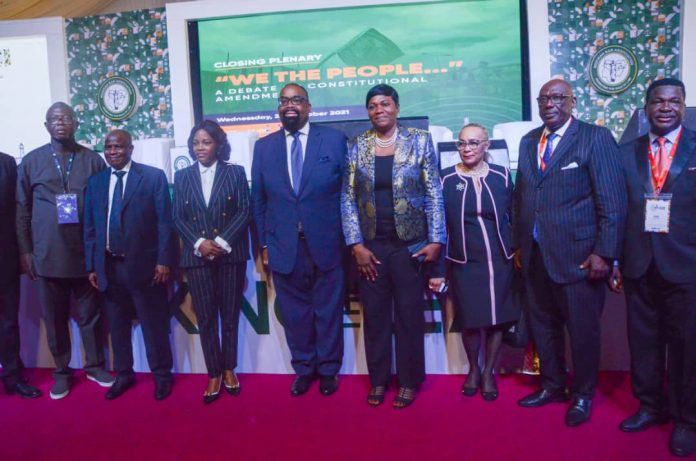 On the opening day of the 61st Annual General Conference of the Nigerian Bar Association (NBA) in Port Harcourt, Rivers State, the Rev. Father Matthew Hassan Kukah,, Catholic Bishop of Sokoto Diocese, had reminded delegates that a constitution, to be considered legitimate, must reflect the people for whom it is formulated, and must be seen by them to do so – that is, they must see themselves in it.

According to NEWSWIRE Law and Events magazine correspomdent in Port Harcourt, a star-studded lineup of speakers at the final plenary session of the Conference on Wednesday echoed that view in their various ways – some with caveats and add-ons – as they all emphasized the inherent flaws in the document, and its consequent inability to take the Nigerian people to their desired destination in its present form. Moderated by Mr. JK Gadzama, SAN, the panel consisted of the Sokoto State Governor, His Excellency, Aminu Bello Tambuwal; Chief Mike Ozekhome, SAN; and Mrs. Ann Kio-Briggs, founder and executive director of Agape Birthrights (a non-governmental organization that promotes human, environmental, and developmental rights in Nigeria). While the aforementioned individuals participated in person, two other participants – Mr. Femi Falana, SAN, principal partner at the law firm of Falana & Falana Chambers; and Prof. Chidi Odinkalu, senior legal officer at the African Programme of the Open Society Justice Initiative – participated virtually.
According to Mr. Gadzama, the constitution’s provenance and its tenuous claims to legitimacy are well-known, but what is the way forward towards making it a more perfect document? Is it an acceleration and a widening of the present efforts by the National Assembly to amend it – as advocated by some – or a total overhaul of the document and the enactment of a new one (at the end of a nationwide people’s referendum) – as canvassed by others?

From the comments of the panelists in response to Gadzama’s poser, even the present constitution’s staunchest defenders would be hard-pressed to deny that, as a product of military fiat and given its many loopholes since its promulgation in 1999, there was little or no connection between it (and the agenda of its framers) with the legitimate aspirations of the Nigerian people. While Odinkalu blamed the document for the promotion of what he called ‘military centrism’ and ‘the infantalisation of the populace’ (that is, the notion that civilians are not mature enough to act in their best interests) and therefore called for a document that would lead towards the ‘restructuring of minds’ on the part of Nigerians, Ozekhome called it ‘a child of bastardy’ and therefore grossly illegitimate. His contention, therefore, was that nothing of fundamental value could come out of such a document, even if it were to go through a million ‘amendments.’ The learned silk went down memory lane to make the point that the Nigerian people had never really had their own constitution, whether during the colonial era, or in the successive civilian dispensations in the country. He also cited recent examples of other nations that birthed new constitutions after referendums, and wondered what the ruling elite in Nigeria was afraid of in refusing – or at least holding back on – a similar exercise. This overhaul, he repeatedly affirmed, is not rocket science. The only factor needed to create a constitution that aligns with both our character as a nation, and the diversity of the people that make it up, is political will and sincerity.

Another deficiency that characterizes the present 1999 constitution (as amended) according to Mrs. Ann Kio-Briggs, is its obvious inequity. She saw no reason to retain in its present form a document that, as a previous speaker had said, ‘lies to itself’. How can the state of Zamfara, for example, be allowed to keep the lion’s share of revenues from the gold being minded on its territory, she wondered, while the Niger Delta only receives a small fraction of the crude oil revenues derived from the region, according to the magnanimity of the powers that be at the centre? How can a constitution allow one part of the country to blatantly violate the principle of federal character at the expense of other sections? To correct this deficiency, she concluded therefore, Nigeria must be unbundled to enable her citizens to extricate themselves from the toxic legacy of ‘Lugard’s Problem’ as she called it – and only a brand-new constitution – subject to the will of the people as expressed in a free, fair and credible referendum – can guarantee that.