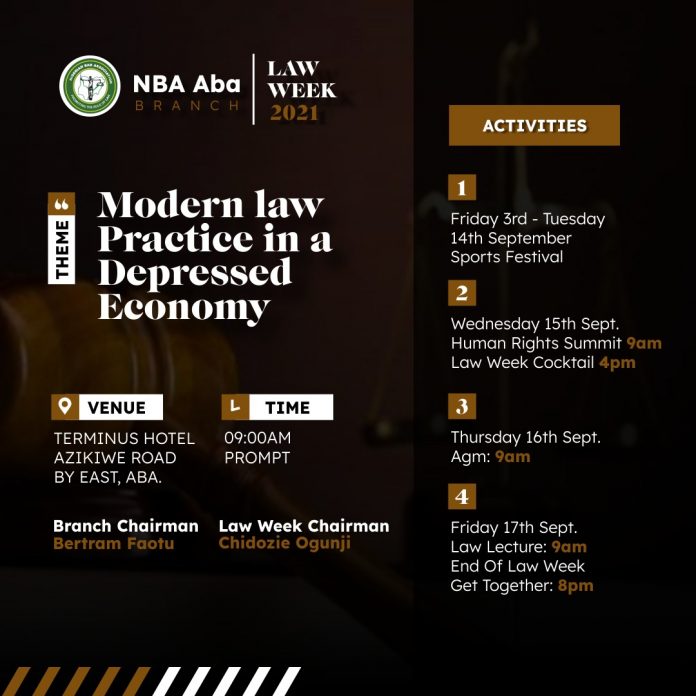 The cream of the Aba-based legal community converged at the city’s Sports Club on Tuesday, September 7, 2021 for an eventful programme of sporting action, as a prelude to this year’s NBA Aba Branch Law Week, with games such as table tennis, lawn tennis, swimming, among others, taking centre stage.

The sports programme saw the emergence of Team Nnorum Udechukwu (SAN), as represented by Chike Ogwo, as the winner of the table tennis competition, which was graced by a crop of distinguished guests, among them Obiora Obianwu, SAN, a member of the national executive committee of the NBA; Snr. Teddy Omeziri, Chairman of the Sports Committee; Prof. Hagler Okorie, chairman of the law week committee and former chairman of the branch; Snr. Chidozie Ogunji, former National legal adviser of the NBA; Snr. Victor C. Nwugo; Snr. Ukpai Ukairo; Snr. Agbai Kalu; Snr. E.O.Kalu and other leading members of the branch.

The 2021 NBA Aba Branch Law Week, which is being held under the theme, “MODERN LAW PRACTICES IN A DEPRESSED ECONOMY,’ is set to feature a galaxy of prominent personalities in the legal space and other sectors of the economy, who would be speaking on the various topics lined for the programme.

The sports meet also saw the registration of seven SAN-sponsored teams in Aba to jostle for the overall trophy, namely:

According to the Chairman of the Sports Committee, Prof. Hagler Okorie, the 2021 Law Week, and in particular the Sports Festival, has re-galvanized the interest of members in sporting activities.

The first week of fixtures saw a contest between Team. Nnorum Udechukwu, SAN, FC square off against Team Chuks Muoma, SAN, FC, while the game between Team Donald Udogu, SAN FC and Team Ernest Ojukwu, SAN, FC ended in a 1-1 draw. Other games are being lined up.

According to the sports committee chairman, the essence of the competition was more than just about winning, but also offers the opportunity for members to network and promote unity among members of the Bar.