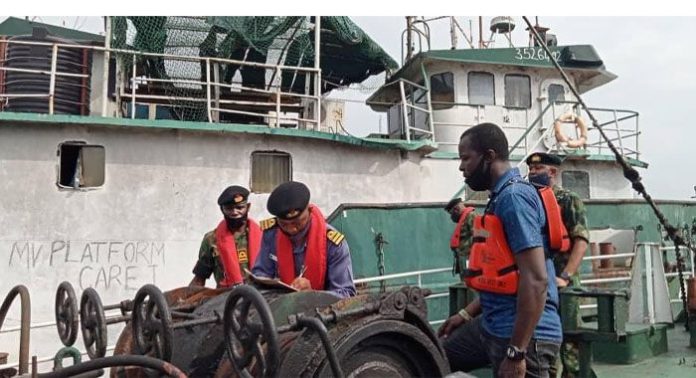 It was gathered that operatives of the newly-contracted private oil pipeline surveillance team, Tantita Security Services, arrested the vessel alongside its seven-member crew on October 6, 2022, on the creeks of Escravos, while crude oil was being loaded illegally into the ship.

About 600 to 650 cubic metres of illegally lifted crude oil in five compartments was said to be on board the vessel with registration number L85 B9.50 as of the time it was arrested.

The Nigerian Navy personnel set the ill-fated vessel on fire on Warri River at about 3pm on Monday following the confession of the ship’s captain, Temple Manasseh, that the vessel was crude-laden.

Manasseh, in his confession, stated “I was arrested in Escravos by Tompolo boys but the alleged stolen crude oil was not loaded by me. My vessel was hijacked by some boys who forced the loaded crude into my ship.

“I don’t know the hijackers at all. But when Tompolo security operatives stormed the scene, they all ran away and abandoned their loading operation which had lasted about two and a half hours”.

Although the Nigerian Navy officials who destroyed the oil vessel did not talk to journalists about the incident, the Marine Intelligence Consultant for Tantita Security Services, Captain Warredi Enisuoh, affirmed that the arrest was a result of intelligence gathering explaining that the operatives “monitored the space via satellite”.

Enisuoh stated that records showed that the Dutch vessel sold to a Nigerian had been variously “used for moving crude oil illegally for years” adding that the arrested vessel had scheduled to take the stolen crude to Tema in Ghana.