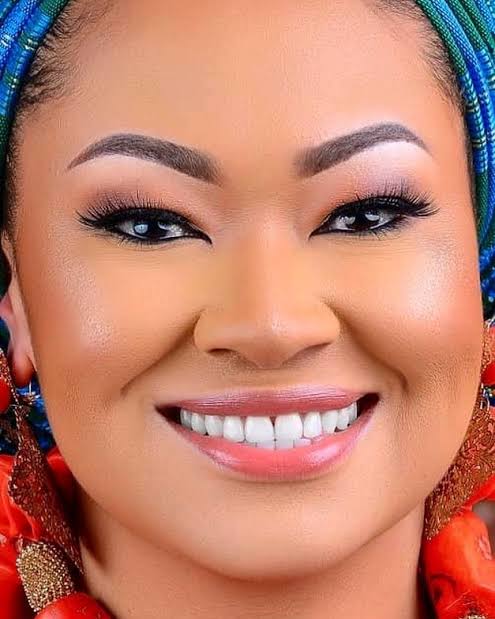 A document has emerged showing that the senatorial candidate of the Peoples Democratic Party for the 2023 elections for Kogi Central Senatorial district, Natasha Akpoti-Uduaghan, was at loggerheads with her husband, Chief Emmanuel Oritsejolomi Uduaghan, before they got married.

The document, a letter by her lawyer, Indemnity Partners, showed the politician sought for N10 billion damages from him.

The letter emerged amid controversy over the accusation by the Kogi State Government that she was reintroducing terrorism into the political scene in the state.

In the letter, she had threatened legal action and demanded N10 billion compensation from her current husband for “breach of promise of marriage, poisoning, foeticide” among other allegations.

In the letter addressed to Uduaghan, the Alema of Warri Kingdom, Delta State, through her lawyers, she said the respected Delta chief was meant to divorce his previous wife in order to pave way for a marriage to her, which he refused to do.

The letter was dated November 19, 2020 and signed by a Senior Advocate of Nigeria, Chief B. C. Igwilo, for Indemnity Partners.

Sources close to the family of Chief Uduaghan’s estranged wife, who described the letter as a blackmail, alleged that the respected chief might have eventually left his wife of over 20 years in order to avoid litigation that might dent his image as the female politician had issued a seven-day ultimatum for him to pay her the huge compensation.

In the leaked letter, the Kogi State politician expressed dismay that Uduaghan, who is a cousin of past Governors of Delta State, Chief James Ibori and Dr. Emmanuel Uduaghan, was still married to his estranged wife as at September 2020.

Akpoti-Uduaghan said she was instrumental to Uduaghan’s successful acquisition of a gas asset, worth about $105 million, a hotel and other investments, adding that she lost her reproductive organ after Uduaghan allegedly served her poison in a bid to abort her ectopic pregnancy.

The letter, titled: “In The Matter of Breach of Promise Of Marriage, Poisoning, Foeticide, Inducing Loss Of Amenities, Assault, Causing Financial Loss And Indebtedness To Natasha Akpoti,” also revealed that the sum of N10 billion she demanded was for the “services” she rendered to Uduaghan, including “loss of financial opportunities and earnings, loss and impairment of reproductive organs, feticide, pain and suffering, assault occasioning harm and breach of promise of marriage”.

The female politician also claimed in the leaked letter that Uduaghan had outrightly repudiated his much avowed resolve and promise to marry her, after subjecting her to slavery and servitude for about three years, “coupled with virtual loss of esteem and identity”.

The Solicitors’ letter reads: “We are Solicitors to Ms Natasha Akpoti (“Client”) and write on her instructions.

“We are instructed that sometime in 2018, you (Uduaghan) made persistent amorous advances to our Client, who capitulated only after you repeatedly made promises of marriage to her.

“At the material time, she was already firmly established as an entrepreneur, innovator and politician of acclaim. Amongst her enterprises was a duly signed N7,000,000,000,00 (Seven Billion Naira) NDDC and SMEDAN project to establish a technology development and business growth hub in Akwa Ibom State.

“You demonstrated the assurance of marriage by parading her before the world and notable personalities as your wife. Corroborative evidence of this abound.

“In reciprocation, our Client dutifully became subservient to you in anticipation of marriage. With a law degree and MBA under her belt, she also became your financial and business adviser and was particularly instrumental in your successful acquisition of a gas asset worth about $105,000,000.00 (One Hundred and Five Million US Dollars), a hotel and other investments. She has competence in oil and gas.

“By your insistence, you curbed her interest in the N7,000,000,000,00 (Seven Billion Naira) NDDC/SMEDAN project and made her to virtually cease all economic and business pursuits except with your whimsical approval.

“We are instructed that in the cause of the relationship, our Client conceived an ectopic pregnancy which led to rupture and loss of her left fallopian tube and ovary. She had a near death experience from this occurrence. As you may be aware, loss of ovary potentially compromises the menstrual cycle. It was in this state of poor health that you savagely beat her up by raining severe blows on her body and strangling her neck, thereby inflicting injuries on her. Time was around 8pm on 6th May, 2020 at your Port Harcourt residence. Video and other evidence of this are available.

“We are further briefed that on the heels of recovering from the agonising ectopic experience, she, nevertheless, took in on September 2020 and happily notified you. Contrary to her expectation, you displayed a cold and undisguised displeasure by insisting on an abortion of the pregnancy. Further, you announced to her utter shock that you were still married and in the throes of a divorce which you hoped will be through by December, 2020 to pave way for marriage and having children. For once, you were flatly turned down by our Client.

“Undeterred by her refusal, you conspired with your steward, one Mr Monday and served our Client a ‘special’ vegetable meal with a view to inducing an abortion of her pregnancy. It was a typical buffet dinner setting with a number of your friends and associates on the 18th September, 2020 at Port Harcourt, but, Monday, out of character and without prior solicitation by out Client, emerged from the kitchen with the vegetable dish solely for her consumption.

Unsuspectingly, she ate out of the vegetable. It was a poisoned chalice and the deadly effect led to a medical emergency, miscarriage and loss of twins by her on 27th October, 2020 at Reddington Hospital, Victoria Island, Lagos.

“It is against the foregoing that you have also outrightly repudiated your much avowed resolve and promise to marry our Client, after subjecting her to slavery and servitude for about 3 years, coupled with virtual loss of esteem and identity. At all material times, you appropriated her entire life by cohabiting with her, planting armed guards and personnel in her residence and hijacking her social life and routine.

“During the period in question, she served you well as business and financial advisor and equally lent you the sum of N400,000,000,00 (Four Hundred Million). She has made repeated demands for repayment of this loan and you have redeemed only N200 Million leaving an outstanding of N200 Million.

“Our Client also seeks payment of the sum of N10 Billion as compensation for consultancy and other services rendered to you, loss of financial opportunities and earnings, loss and impairment of reproductive organs, feticide, pain and suffering, assault occasioning harm and breach of promise of marriage.

“TAKE NOTICE that if you fail and or neglect to make this payment within 7 days of your receipt of this letter, howsoever received, we shall be constrained to explore all options, actions and steps legally available and necessary to enforce our Client’s claims against you as we deem fit, without further recourse.”

Efforts to reach Akpoti-Uduaghan by The Eagle Online on Thursday did not succeed.

However, she had in the allegation against her on backing terrorism in Kogi State pointed accusing fingers at the government.

In a statement by the Kogi State Commissioner for Information, Kingsley Fanwo, she was accused of backing an alleged political thug from the state arrested in Abuja by security operatives.

The State Government therefore sought for her questioning by the Department of State Services and other security operatives.

Responding to the allegation, Akpoti-Uduaghan said if she must be invited, the Kogi State Governor, Yahaya Bello, should also be quizzed.

She said all accusations against her were to ensure she does not win the senatorial election.

She said during the last election, what was used against her was the fact that she was not married, adding that now that she is happily married, her detractors were bringing up other issues as a distraction.

She said this would not work as she has solidified her base and was coasting to victory.

Akpoti-Uduaghan said in an interview on a national television: “I will like that the DSS invite me for questioning and they must also invite Yahaya Bello.

“And I will want the interrogation by the DSS (for both of us) to be televised.

“I don’t mind supplying the network for Channels, Arise, AIT and other stations interested.

“It is time for Nigerians to know the truth.

“All of this (allegation) is political and Yahaya Bello knows he’s going to lose.

“His government is going to lose.”