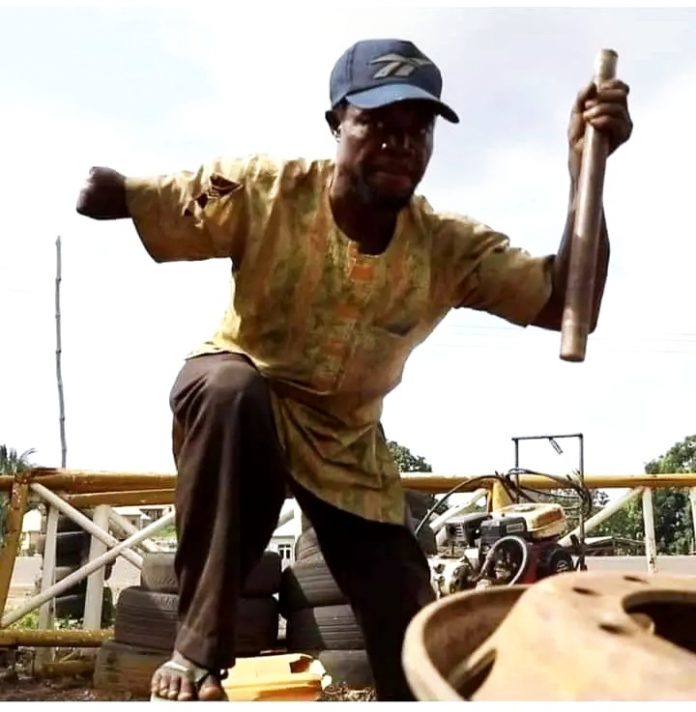 Sheidu who is based in Agassa, Okene local government area, had lost his right arm in an accident in 2002.Undaunted and seeking to be relevant to himself and his society, he acquired some skills and has since continued to discharge his duties as a vulcanizer, a husband and a father.

Speaking in a Facebook Live video shortly after the German-made European Twin Busch machine was delivered to her house in Abuja, an elated Akpoti expressed optimism that the gesture would help to strengthen the faith of other persons living with disabilities in the truism that there is indeed ability in disability.She expressed delight over the timely delivery of the multi-million naira equipment which was shipped into Nigeria from Amsterdam, Netherlands, with a shipping cost of over a million naira.

Narrating her connection to Sheidu’s story and what inspired her choice of gift, Akpoti said; “some months ago, the story of a particular artisan (vulcanizer) from Okene in Kogi State went viral on BBC that he needed a particular tool to ease his trade, and then I made a request asking him what he wanted. I think he responded last month. The gentle man requested some tools. I happened to be in London. So, I went online to search for the very best that I could afford. I placed the order while I was in London. I did not want to go for the Chinese version. So I went for that which was made in Germany. So this is one of the best tools, all pure steel.”While acknowledging the efforts of Dr. Okeme Arome for bringing Dauda’s story to light, Akpoti noted the negligence of the gentleman’s requests despite the viral video of him done by the BBC.

“I would like to also give credit to Dr. Arome Okeme for first making a video of the gentleman during our Senatorial Campaigns and bringing him to light upon which the BBC News Pidgin took over and made a broadcast of him. I think that was actually one of the most watched BBC clips. It gained about 7million views and it was shared over 55,000 times. But I was surprised that even at that, no one was able to buy the gentleman his tools.

“I mean prayers are important but sometimes we should actually try to go beyond prayers. When I asked him if he had gotten any tool he said no. I said okay. Being from the same State, the same Senatorial District as the gentleman, it was only humane and responsible of me to have done that. Like I said, what is more important to me and the joy is that I was able to afford an European all-steel, solid equipment for the gentleman”, she added.

Akpoti further unveiled her plans of meeting with and personally handing over the machine to the industrious vulcanizer as part of the events to mark her 42nd birthday.She said the gesture would ease Sheidu’s operations, expand his business and enhance his turnover.“I can’t wait to hand it over to him in December either on my birthday which is 9th of December or a few days before when I visit to commission the Okene-Ibillo-Lampese road, the Ihima-Ege road which we are constructing.

I can’t wait to be home! Have a blessed weekend.”The two-in-one equipment, a Tyre Changer and Wheel Balancing is not commonly used by roadside vulcanizers in Nigeria due to the high cost of purchasing them. Hence, only well-heeled auto-service and tyre centres in the cities have them.