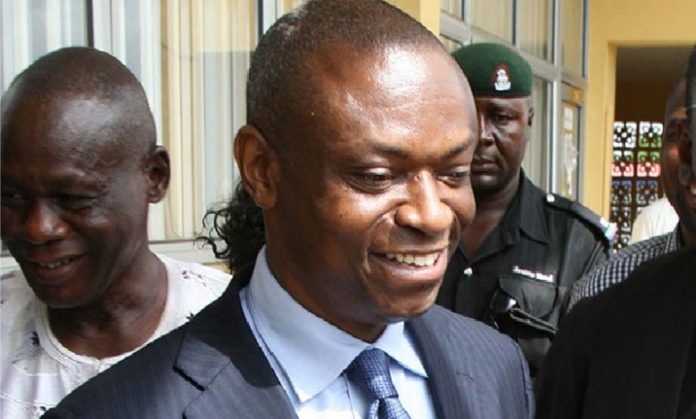 On Wednesday night, a tense atmosphere prevailed in an Ikeja High Court as Francis Atuche, a former Managing Director (MD) of Bank PHB, implored Justice Lateefa Okunnu not to imprison him following his conviction for robbing the bank of N25.7 billion.

In 2011, the Economic and Financial Crimes Commission (EFCC) found Atuche and Ugo Anyanwu, the bank’s former Chief Financial Officer (CFO), both guilty of 22 of the 27 counts of conspiracy and stealing brought against them.

According to the News Agency of Nigeria (NAN), Okunnu found Atuche’s wife, Elizabeth, who was on trial alongside the duo, not guilty of two counts of conspiracy and stealing.

Atuche and Anyanwu were sentenced at nighttime following a very length  judgment that began at 9:12 a.m. and ended at 9:21 p.m.

After convicting Atuche and Anyanwu at 8:18p.m., the judge asked if they had any plea to make.

They answered in the affirmative.

Addressing the court, Atuche begged not to be sent to jail.

He prayed Okunnu to temper justice with mercy.

“All the time I was the MD of Bank PHB, I gave my all to the bank.

“Never at any material time did it occur to me that I would set up a scheme to defraud the bank.

“I plead for mercy, leniency, your kindness, and I plead that out of your kindness and generosity, you will not allow me to go to jail.

“I am sorry and remorseful,” he said.

Atuche told the court that as a professional banker and chartered accountant, he certainly did not want to become a convict.

“I pray that God will place in your heart to be kind.

“I plead from the bottom of my heart. I’m extremely sorry;  today will be a turning point in my life, I’m very sorry,” he begged.

Atuche’s  counsel, Mr Paul Nneoma, in his plea for mercy, described Atuche as a responsible family man who had never been convicted of any crime.

He appealed to the court to give Atuche a fine instead of incarceration, in order to preserve his professional career.

Pleading  also, Anyanwu told the court that he was the only son of a police officer who died when he was barely a year old.

He said that he grew up on the premise of hardwork.

“What I achieved in the banking industry is by stint of hard work. I have suffered in the last 10 years of this trial.

“I am sorry if I was appearing cocky in the witness box during my examination-in-chief.

“I have two kids who are barely teenagers. They look up to their father, and I wonder what kind of impact this will have on them.

He said that one of Anyanwu’s children had a medical condition requiring special attention.

He added that Anyanwu was hypertensive, urging that the court should take judicial notice of the COVID-19 pandemic and impose a fine on him instead of  custodial sentence.

Reacting to the pleas of the defendants,  EFCC team led by Mr Kemi Pinheiro (SAN), requested for a stiff sentence as well as an order of restitution against the convicts.

He said that Lagos State  Government spent much funds and resources prosecuting the case in the past 10 years.

“We were taken to the Court of Appeal, the Supreme Court several times by the defendants.

“During the trial, they were rude and cocky. That is not remorse, the third defendant (Anyanwu) decided to hold unto his loyalty to his boss (Atuche) against his loyalty to the state.

“We pray the court imposes the maximum sentence and orders restitution,” he said.

She equally made an order for restitution.

The judge said Atuche abused his position of trust by stealing from the bank.

“By stealing from the bank, they stole from innocent customers of the bank.

“I hereby make an order of restitution against the first and third defendants to refund the sums stated in counts one to 11, 14 and 24.
“The sums are to paid to the relevant agencies that recovered the funds on behalf of the bank,” she ordered. (NAN)