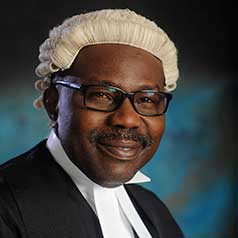 Embattled National Legal Adviser of the All Progressives Congress (APC), Mr. Muiz Banire, SAN, failed to appear yesterday before the disciplinary committee of the party at Ward C of Mushin Local Government of Lagos State.

Banire was being investigated for alleged anti-party activities and misappropriation of campaign materials and logistics.

The panel summoned Banire to appear at 10 a.m yesterday at Bishop Aggey Memorial School, Ilasamaja in Mushin, to defend the allegations against him by two members: Olukayode Tunde Tolu and Ayodeji Adebayo.

As early as 7 a.m, members started trooping to the venue, while the panel waited till about 11.20 a.m before sitting.

Abass said the committee would examine the allegations against Banire by concerned members.

The panel chairman assured the party that the committee would be fair, saying its decision would be submitted to the ward executive of the party for delivery to the Local Government and APC  State Executive.

Badru addressed the petitioners, but the senior advocate was absent.

The panel secretary displayed copies of advertorials in two national newspapers and evidence of receipt of the courier letter inviting Banire.

He said: “Party discipline and party loyalty made APC what it is today. Whatever the decision of the party is, it is binding on members. If a member goes against the party, there must be sanction.”

The petitioners said Banire should be suspended and debarred from holding party office as well as contest for 10 years.

They said besides the fact that Banire had been absent from ward meetings for over two years, contrary to Article 9 (2) (iii) of APC’s constitution, he had also been engaging in unrestrained media campaigns against the party, its organs, leaders and functionaries.

The petitioners said the embattled party chieftain “deliberately” embarrassed APC, contrary to Article 9 (2) (I) contrary to the constitution.

The petition reads: “That the member (Banire) has openly been encouraging and inciting court actions against the party, its organs and functionaries, when internal dispute resolution mechanisms have not been explored or exhausted, contrary to Article 21 (A) (ii) contrary to the constitution.”

“The member (Banire) has been conducting himself in such a way and manner as to constitute a distraction to the good policies and programmes of the government of President Muhammadu Buhari, contrary to Article 21 (A) (ii) contrary to the constitution.”

“The member (Banire) collected campaign ‘materials and logistics’ for the 2015 general election and the recent local government elections without deploying, disbursing or applying same for the benefit of the party. He has failed to pay, as at when due or howsoever, party dues and levies.”

“The member (Banire) has been conducting himself and continues to conduct himself in such a way and manner as could jeopardise, endanger or damage the electoral fortunes of the party and the party brand contrary to Article 21 (A) (ii) contrary to the constitution.”

Hundreds of party leaders and members in Mushin Local Government Area staged a peaceful protest to the Governor’s Office at Alausa in Ikeja where they submitted a petition for  transmission to the national APC leadership.

The protesters said Banire “intentionally” neglected his duties as the party’s legal adviser by failing to defend the party’s interest in a law suit.

They added that he caused a legal representative to disavow the party in the law suit.