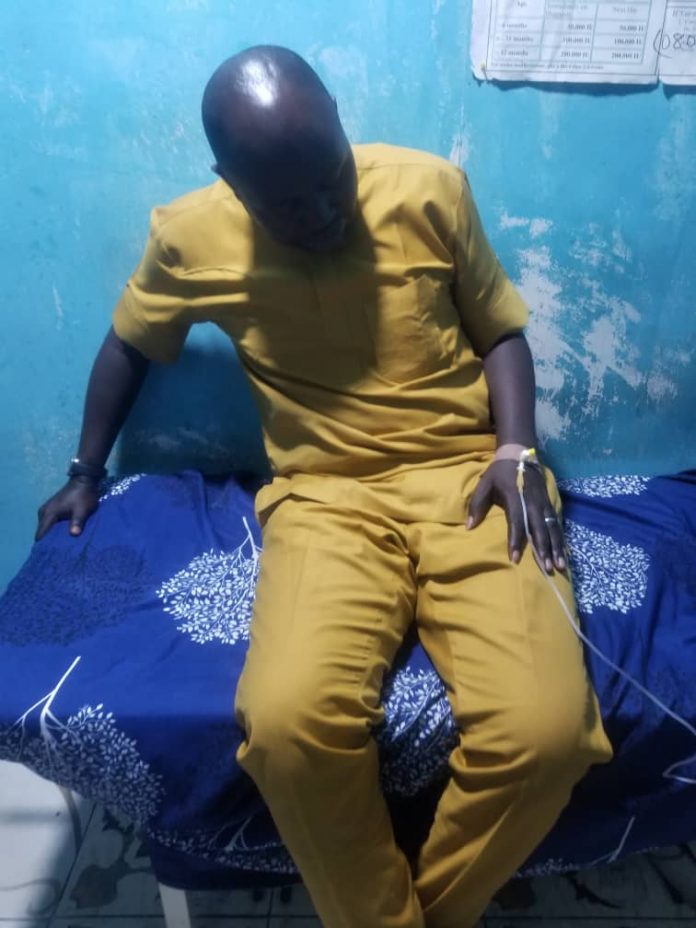 Nwota Chinedu, a legal practitioner in the law firm of Alphacentric Partners of 31 Igbosere Road, Lagos Island and a member of the NBA Lagos Branch, has become the latest victim of the rising spate of physical assaults against lawyers who are being attacked simply for doing their jobs.

In a conversation with NEWSWIRE Law and Events Magazine’s correspondent in Lagos, Nwota recounted his grisly ordeal, which, according to him, was in connection with a tenancy matter in connection with Messrs Olukunle Oyewole & Co. of Suite 2 Right Wing, 2nd Floor, Mandilas Building, Simpson Street, Lagos Island, with whom his firm enjoys a long relationship. After being briefed by members of the Bennie Moore Traders Association on a tenancy matter involving them and about 411 lawful tenants at 13/17 Breadfruit Street on Lagos Island, Nwota’s firm filed a fundamental human rights action in the Lagos State High Court in suit NO: LD/11815MFHR/2021 for the enforcement of the tenants’ rights.

On September 16, 2021, he said, Hon. Justice Olufunke Sule-Amzat of Court 51 of the High Court of Lagos State, delivered judgment in favor of the Applicants – upon which, on October 13, 2021, on the Judge’s orders, sheriffs of the Lagos State High Court carried out the immediate unsealing of the sealed property.

On October 15, 2021, Nwota said, the Secretary of the Traders’ Association called his office with the news that men from the Lagos State Building Control Agency (LASBCA), accompanied by thugs stormed the premises at 13/17 Breadfruit Street, Lagos Island and ordered the business people to vacate the premises, Nwota was dispatched to the scene to ascertain the state of affairs. The environment, he said, was already charged with tension by the time he arrived at the scene, and he was directed to one Alaka, apparently a leader of the group , whom he showed a copy of the Court judgment.

Alaka, however, refused to receive the said process, upon which Nwota directed the Association members to take a video recording of the encounter, and also urged the business owners not to be intimidated by persons whose mission was clearly illegal.
“When Alaka saw that the traders would not be intimidated,” Nwota related, ‘he gestured to the thugs, asking them to attack me. He then left the premises shortly after, accompanied by his team.”

On the 28th day of October, 2021, Nwota’s office was again contacted and informed that the same team from the Lagos State Building Control Agency, again accompanied by thugs, were actually removing the doors of some of the occupants’ shops, leaving their wares unprotected.
“I raced to the Plaza at 13/17 Breadfruit Street, upon which a LASBCA official ordered the task force officers who accompanied them to arrest me,” said Nwota. “Not only were my phones taken from me, but the policemen thereafter manhandled me and dumped me in a Lagos State Taskforce Detention Van in which I was driven around different locations from 9: 15 am until about 6 p.m without any means of communicating my location to anyone.”
Nwota said he was eventually ordered to disembark from the vehicle – only to discover that he had been forcefully transported all the way to the office of LASBCA in Ikeja, where the GM of the organization, Mr. Gbolahan Oki, directed the agents of the task force officers to beat Nwota and four others that were also arrested.

Nwota told NEWSWIRE, “The GM compelled me to lay on the floor of the premises, saying that I, as ‘A LESSER HUMAN BEING’ shouldn’t address him while standing on my feet. Oki also threatened to ‘BEAT THE LAW’ out of me. All the time he kept making reference to things like ‘OMO IBO’, ‘BIAFRAUD’, etc.

That was the cue, Nwota said, for one of Oki’s men to slap the lawyer in the face before seizing his pen (which Nwota said he had bought on a trip to China before the Covid 19 lockdown). Along with four detainees his pictures was taken.
Thereafter, Nwota was taken back into the van and driven to the Bolade Oshodi Taskforce office where he was further detained without anyone telling him his offence.
“Even when I began to develop breathing difficulties during my detention, the officials bluntly refused my request for medical assistance,” lamented Nwota.
At about 5am on Friday, October 29th, 2021, Nwota was brought out of his cell with 4 other detainees, namely, Uche Udem, James Ezenwa and Owolabi Usman to give statements to the police (which, however, must be backdated to October 28 – the day the Taskforce office received the detainees.)

Nwota said he regained possession of his phones at 11 am, and was finally able to establish contact with his brother, who raced to the place – only to be asked to wait for LABSCA’s lawyer, one Mr. Ovie (who gave his phone number as 08177224166) to attend to him
Ovie later came to Nwota’s cell, showed him a mugshot from his (Ovie’s) phone, and then made Nwota an offer. “He told me that the only way to make this entire episode go away,” Nwota said, “was for me to hands off the brief. When I refused to do so, he stormed out of the cell.”
At about 1.00 pm, Nwota said, another LASBCA lawyer by the name of Odugbemi also visited Nwota’s cell and tried to make him promise not to file a case of abuse of his fundamental human rights against the agency, and he (Odugbemi) would try to see to the lawyer’s release. When Nwota refused to make any such promises, Odugbemi also left – though without opposing the administrative bail.

At around 7.00 pm on Friday, the Taskforce Chairman granted Nwota police bail on account of his worsening health. “They said I could leave – on condition that my younger brother should use his car as collateral for my bail. My brother duly did so. The car is still in the custody of the Taskforce as we speak.”

Upon his release, the exhausted and dehydrated Nwota suddenly lost consciousness while on his way to the hospital. He was rushed to Ason Medical Center in Ketu, where he was admitted. He was later referred again to the General Hospital for further care and tests.
NEWSWIRE correspondent reports that Nwota Chinedu is currently on admission at the Federal Medical Center in Ebute Meta. He is appealing to all relevant stakeholders (especially the high offices of the NBA Lagos Branch and the Nigerian Bar, as well as NBA national body, to help intervene in this matter on his behalf and enforce his fundamental human rights.