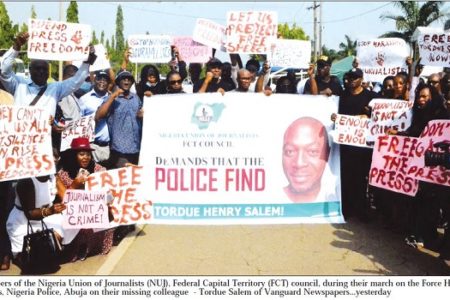 The journalists urged Inspector General of Police Usman Alkali to ensure that the journalist who has been missing since October 13 is returned alive to his family.

The journalists dressed in black marched from the Ministry of Women Affairs to force headquarters wielding placards with inscriptions; Enough Is Enough; Free Tordue Now, Journalism Is Not a Crime, Free The Press, Stop Attacking Journalists.

Chairman of the Council, Emmanuel Ogbeche who submitted a petition to the police, called on the IG to step up Intelligence and investigation to unravel the mysterious disappearance of the journalist. The police chief represented by Force spokesman Frank Mba, said the Salem case was reported to the National Assembly Police Station on October 15.He said from their investigation, Salem slept in the house of his sister somewhere around Life Camp on October 12, woke up on October 13, and took a Bolt Taxi to National Assembly.

“After close of work, he was last seen at the National Assembly between 4pm and 5pm on October 13, and thereafter his colleagues never saw him again. Speaker of the House of Representatives, Femi Gbajabiamila called for prayers for the safe return of the Vanguard correspondent. Gbajabiamila made the call at a capacity-building workshop for the National Assembly Press Corps, media aides and information officers on legislative reporting and citizen engagement on Monday.