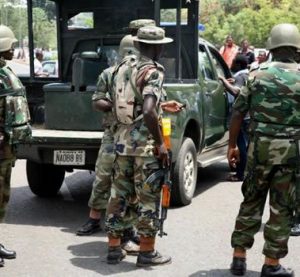 The frosty relationship between the separatist Independent People of Biafra (IPOB) and troops of the Nigerian Army was further strained, yesterday, following a clash in the commercial city of Aba, Abia State, barely three days after an earlier incident in the state capital.

IPOB claimed that troops surrounded the residence of its leader in Umuahia.

IPOB Media and Publicity Secretary, Mr. Emma Powerful confirmed it saying: “The peaceful area of Ubakala junction, Isi Gate and Ibeku, Nnamdi Kanu’s hometown has become a dangerous zone since the declaration of Operation Python Dance in the South East.”

The soldiers also manhandled journalists, who, in the process, lost their i-Pads, telephones and laptops.

State Chairman of the National Union of Journalists (NUJ), John Emejor, said troops invaded the union office over allegation that some journalists who were at the secretariat’s balcony took pictures of officers involved in  the show of force, tagged Operation Python Dance 11.

Following reactions and condemnations, the army claimed the magnitude of the attack was over-blown, but added that troops involved in the attack would face disciplinary action.

“While it was true there was an issue between some soldiers  on routine patrol, the magnitude is not as was reported. What happened was that while the soldiers on patrol near the Abia State NUJ Secretariat, they noticed some people filming them. Unfortunately, they seized and damaged their recording devices; an i-Pad and two mobile phones. Preliminary investigation shows that the items belongs to journalists on their legitimate duties. Consequently, the Commander 14 Brigade and Deputy Director Army Public Relations 82 Division  waded into the matter, which has since been resolved amicably,” Major Oyegoke Badamosi said in a statement.

Apparently to halt the sour relationship between the supporters of IPOB and the government from sliding further,  Governor Okezie Ikpeazu, announced a three-day curfew in Aba, the commercial hub of the state, even as South East Governors Forum (SEGF) scheduled an emergency meeting for tomorrow to discuss the issue.

Ikpeazu in a statement he personally signed at the end of a crucial meeting with heads of security agencies at the Government House, said the curfew would be effective from 6pm to 6am.

While the governor did not see anything wrong with the Python Dance II, he, however, demanded that it should be carried out according to international best practices.

He further urged members of the public and Aba residents to be law abiding and go about their businesses without any fear, as government was committed to ensuring the safety of lives and property of visitors and residents.

The statement read in part:  “Abia State has for the past few days been the focus of security searchlight occasioned by the reported skirmish between some groups in the state, especially Indigenous People of Biafra (IPOB) with men of the Nigerian Army.

“Government notes and has observed the frenzy of activities of members of IPOB within Afara-Umuahia, the ancestral home of the leader of IPOB for some months now. Government is equally aware of the recent proclamation by the Nigerian Army of Operation Python Dance II within the South-East geopolitical region of Nigeria.

“The operation as declared by the Army is intended to check kidnapping, banditry, assassination, secessionist activities within the region, amongst other forms of criminal activities.

“The recent confrontation between the Nigerian Army and members of IPOB on Sunday, 10th September, 2017, could presumably be attributed to the commencement of the said Operation Python Dance II.

“While the Government of Abia State recognises the right of the Nigerian Army and other security agencies to perform their statutory duty of protection of lives and property of Nigerian citizens, such duties must be carried out within acclaimed Nigerian and international standards of engagement with the civil populace, with due respect to the human rights of citizens and sanctity of human lives.”

Ikpeazu said the state would co-operate with security agencies to maintain the rule of law and order.

Besides convening a special session to discuss the security situation in the zone, SEGF also set up a seven-man committee to investigate the immediate and remote causes of the clash involving military officers and members of IPOB in Umuahia.

Director of Media and Communications to the South East Governors’ Forum, Mr. Mike Udah, in a statement, yesterday, said the committee was set up as part of steps to resolve the crisis and forestall further occurrences within the zone.

“To ensure that the problem is nipped in the bud, they have slated a meeting for Friday September 15 and they have set up a seven-man committee to investigate the matter and report to them at the venue of the meeting.

“The findings by the committee would be tabled before the governors to enable them take necessary action. The South East Governors are also in contact with the military and other authorities with a view to ensuring the prevalence of peace in the country.”

Udah, however, denied reports that the governors had condemned the army for their reported invasion of Kanu’s residence in Umuahia.

Reacting to the attack on its secretariat and members, the leadership of the NUJ, Zone C, (South East) told President Muhammadu Buhari to call the rampaging soldiers to order.

According to a statement signed by the Vice President, Zone C, Mr. Chris Isiguzo and the Zonal Secretary, Mr. Kenneth Ofoma, “the attack on the journalists on the ostensible suspicion of taking photos and/or videos of the military on a ‘show of strength’ in a highly populated busy street, without any atom of security threat, calls to question whether Nigeria is still operating a civil democracy or military dictatorship?

“Has Nigeria returned to the dark days of police state? Or is Nigeria at war? If indeed the military wants to ‘showcase her strength’, what is wrong in the media, if at all they took pictures or video, in helping them to showcase the military power? Haven’t they been calling for media support and collaboration?” they queried.

“Nigeria deserves peace and development, and South East is peaceful, as we have no evidence that the governors from this zone, who are the chief security officers of the zone, had made any request for military deployment. Even the latest United Nation’s report indicates that South East geo-political zone is the most peaceful in the country.

“We call on the National Assembly and the international community to wade into this fragrant abuse of human rights, and premeditated provocation of civil disobedience that might precipitate shedding of innocent blood.

“We also call on the Chief of Defence Staff, Chief of Army Staff and the General Officer Commanding 82 Division, Nigerian Army Enugu to take note of this unprofessional conducts and punish the unruly officers. They should also take immediate steps to replace damaged equipment, gadgets and compensate our colleagues man-handled. There must be rules of engagement in line with international best practices,” the union said.

It also advised the Federal Government to adopt dialogue in handling issues of pro-Biafra agitations.

Ben Onwuka, leader of the Biafra Zionist Federation (BZF), has given the Federal Government a 48-hour ultimatum to withdraw troops from the South-East and other regions within the area.

The self-acclaimed Biafra president said the Federal Government and the Army hierarchy would pay dearly for the lives lost in the said attack.

In its reactiion, the Ohanaeze Ndigbo said the ongoing operation was a military invasion and urged the presidency to direct the military to call off the exercise.

Ohanaeze President General, Chief John Nnia Nwodo said the military operation was the height of provocation and may escalate the already tensed situation in the zone.

He said the operation was only meant to intimidate South East residents.

The Ohanaeze leader said there were more civilised and established ways to resolve the issue of self-determination, democratic and security challenges rather  than resort to the use of brute force.

He warned that if what he called the  act of intimidation was not discontinued, the group would be left with no alternative than to conclude that “this is a containment policy aimed at the South East to intimidate our people from freely expressing their anger and angst at their marginalisation and treatment as second class citizens.”