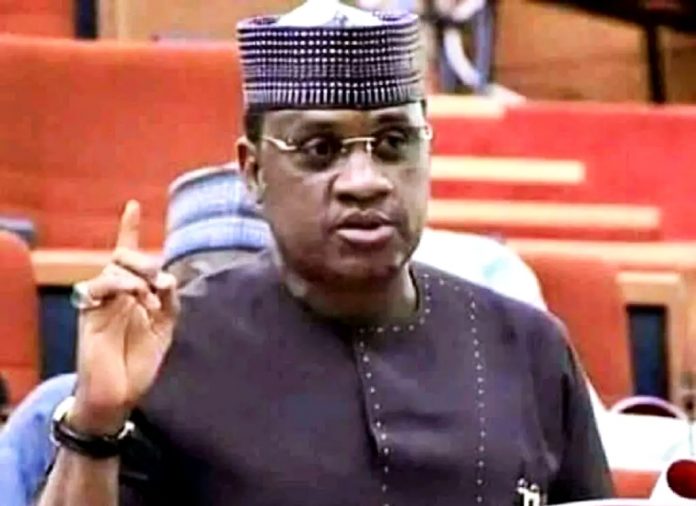 *Denies meeting with Atiku, others

A chieftain of the All Progressives Congress (APC) and one of the current actors in Zamfara State, Senator Kabiru Marafa, yesterday, sent a strong warning to his traducers and stressed that no one, no matter how highly placed, had the capacity to send either him or a former governor of the state, Abdul-Azeez Yari, out of the party.

Marafa, who also denied meeting with a former Vice President, Atiku Abubakar and aformer Senate President, Bukola Saraki, a development that had since sparked defection rumours, however, described the inauguration of party’s executive in the state as illegal. Reports, at the weekend, had it that Marafa and Yari met with Atiku and Saraki last Thursday. The meeting allegedly took place at Saraki’s residence in Maitama, Abuja.

The agenda of the meeting was not made public, but sources claimed it was not unconnected to the alleged planned defection of the two APC chieftains to the opposition PDP.Yari and Marafa has since had it rough in the party in the state over the struggle to control the soul of APC in Zamfara State, after first tearing down the party over their differing interests.

Their challenge was further compounded, when the governor, Bello Matawalle, who reaped heavily from the party’s 2019 misfortune, also joined the APC and effectively seized the leadership of the party with the help of the Caretaker Committee Chairman and Yobe State Governor, Mai Mala Buni.But in a telephone interview with THISDAY, Marafa said while it was true that Atiku, Saraki and himself went to Yari’s house, they all went at different times due to the mishap he had.

He asked: “Do you have any evidence of that meeting? There has never been any meeting between the four of us. All these things are being orchestrated by some people that think God can no longer support them to actualise their ambition like he did before. They have abandoned God and now pitch their tent with human being in the name of ruling party.“I think I have grown bigger than that kind of nonsense. They are too eager; they feel they cannot prosper in APC if we are still there. We made APC, APC didn’t make us. So, I can see beyond APC and I am in APC by choice, it is not that APC can make me anything.

Like I have said times without number, I made APC, APC didn’t make me anything. So, I live in APC today, because I want to stay in APC; because I feel APC is my house and like I said. I was a senior engineer, when APC was constructed or in the construction team that built APC.”Marafa, who also said himself and Yari occupy an executive floor in APC and could not be thrown out by anybody, added that if he decided to leave the party, he would announce his decision to leave, but until then, he remained in APC.

His words: “Nobody can send me out of APC and I can leave APC, when I want to leave APC. And when the time comes, I will go to Eagle Square and announce to everybody that I have left APC. It’s nothing. Before that happens, people should not put words into my mouth. Let them that are renegade continue to stay in APC and do whatever they want to do in APC.“But take one thing away from this our discussion with you now, like I said in my previous interview, Oba or Emir doesn’t go on transfer. So, I am an Emir in APC, I don’t go on transfer, unless if I intend to do so willingly and the day I want to go, I will announce to the whole world that I am living.”

While challenging anybody who felt APC belonged to him to expel him if they could, Marafa added: “So, don’t join the bandwagon of those propagating lies. There have never been any meetings like that and if there is any, come up with the pictures. I have seen the picture of Yari and Atiku. Yari had a small injury on his head and Atiku went to his house to see him, which is normal.“The fact that Atiku is in PDP and Yari is in APC does not mean that if there is any mishap to any one of them, they cannot visit one another. And I learnt Bukola Saraki also went to see him but at different times. And I went to see him at different times, but there has never been such meeting.”

Marafa noted that those behind the rumours were “little people” that joined the party lately and felt they could not actualise their ambition with the presence of Yari and Marafa in APC.“They will continue to hold that dream – a day dream, which will soon turn to a nightmare and it will continue to hunt them, because part of the matter is that they have deceived themselves, because of what God has done to them in PDP and turn round today to say they have now dumped the party that brought them to government house and join another party for them to get a second term. Write it and keep it, they will never realise their ambition.

Help me announce to them that Yari and Marafa are founding members of APC, unlike them and APC is our house and we occupy an executive floor in APC and nobody can send us out. It is only we, when we are ready to leave, that can send ourselves out.”On the inauguration of the state executives of the party scheduled to hold on February 2, 2022 ahead of the national convention, Marafa described it as the constitution of illegal state executive by an illegal caretaker committee unknown to the constitution of the party.

According to him, “Who do you call the leadership of the party? That is an illegal body unknown to the constitution of the party. So, how can an illegality recognise another illegality? What is the result of that recognition. Illegality can only beget illegality. So, I don’t give a damn to that?”