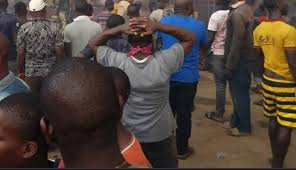 A 25-year-old man identified as Joseph Friday, has been arrested by the police in Akwa Ibom state.

The man was nabbed for allegedly killing his 65-year-old father at their residence in Edebom 1 village in Nsit Ibom LGA in the state over claims that the deceased appeared to him in a dream and hypnotized him before depositing a spell in his body.

The suspect who was paraded by the Akwa Ibom State Police Command on Tuesday, January 3, confessed to the crime.

According to him, whenever he was” hypnotized by the deceased, something like a tortoise would enter his body and he would become mentally unstable”.

Recounting how he carried out the dastard act, the suspect said: ”My Father used a charm on me, he appeared in my dream and hypnotises me. Whenever he appears, something like a tortoise enters my body and I start to behave abnormally. I am a 25 years old farmer, I hit my father with my hand and he died”.

Speaking on the incident, the state Commissioner of Police, Olatoye Durosinmi, said the suspect’s mother reported the incident to the police, leading to the arrest of her son.

“Relying on a petition, dated 19th December 2022 from one Mrs Eno Friday Wilson of Edebom 1 village in Nsit Ibom LGA, about the murder of her husband one Friday Wilson Usanga ‘m’ age 65 yrs old of same address.