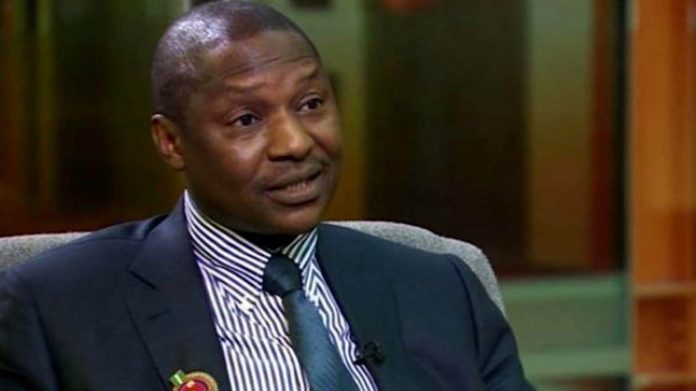 The Attorney General of the Federation and Minister of Justice, Mr. Abubakar Malami (SAN) has denied link to any purported memo to President Muhammadu Buhari, urging him to suspend the Constitution of Nigeria, so as to have a free hand in dealing with the worsening insecurity in the country.

Malami in a statement by his media aide, Dr. Umar Gwandu, not only denied advising the president along such lines, but also reiterated his support for constitutional democracy.

While dismissing the entire report as false, he however urged Nigerians to ignore the report, describing it is handiwork of enemies of democracy.

“The attention of the Office of the Honourable Attorney General of the Federation and Minister of Justice, Abubakar Malami (SAN) has been drawn to a false and fictitious report alleging that there was a secret memo emanating from the office to the Presidency.

“General public are hereby asked to disregard the media report as fabrications of anti-constitutional democratic stability in Nigeria.

“Malami remains a true democrat who believes in rule of law and tenant of democracy and constitutional order”, the media aide stated.

He further stressed that the office of the AGF is a constitutionally recognised one with its role and responsibilities embedded in the constitution.

The statement added that it is antithetical to common sense to think that the holder of such coveted office will stoop to what was printed by the media.

“The government does not operate in secrecy as it is not a clandestine operation. Hence, Malami discharges his constitutionally recognised mandates in compliance with principles of transparency, openness and accountability”, the statement added.