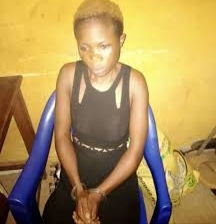 Narrating how she carried out the act on December 2, Dominion, who was arrested in her hometown in Calabar, Cross River State, said she hit her late boss in the head with a stool while she slept.

The suspect, who spoke while being paraded at the Edo State Police Command Headquarters in Benin, disclosed that she made away with N100,000, a wristwatch and jewellery from the GRA residence of the Igbinedions.

She said, “I killed mama to carry her money. She did not offend me. While she was sleeping on her bed, around 12.01am on December 2, 2021, I used a stool to hit her in the head and she shouted for help; but only the gateman was around and he did not hear the shout. Mama later died.

“I waited till 4am on December 2, 2021, before leaving the house with mama’s N100,000, wristwatch and jewellery. I escaped to Cross River State, but I was later arrested by the police.”

The deceased was buried in Benin on December 10.

The prime suspect’s elder sister, Patience, was first arrested by the police, before Dominion was nabbed and moved to Benin for investigation.

Patience said neither she nor their parents knew anything about the crime committed by her sibling.

The Edo State Commissioner of Police, Phillip Ogbadu, said it took time, efforts and money to arrest Dominion, adding that no fewer than 20 persons were first arrested before the suspect was caught.