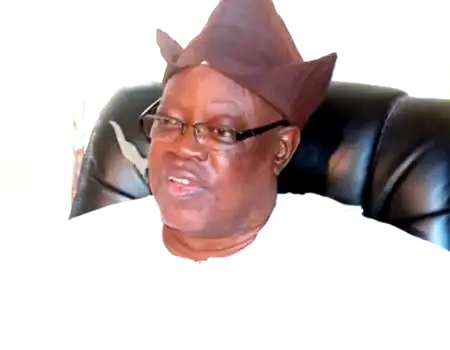 Disclosing the development at the conference that was boycotted by the Osi Olubadan, High Chief Rasidi Ladoja, Iyalode of Ibadaland, Chief (Mrs.) Theresa Oyekanmi, the Osi Balogun of Ibadan, High Chief Tajudeen Ajibola debunked the insinuation in some some quarters that there is a legal tussle on the succession to the Olubadan throne.He also dispelled the insinuation relating to the health a d willingness of the new Olubadan-designate, saying all the negative media reports are nothing to write home about.

He said, there was no iota of truth in the rumour going round about who will become the next Olubadan of Ibadaland adding that: “We have endorsed the Otun Olubadan, High Chief Lekan Balogun as the next Olubadan of Ibadaland.”“This is the decision that was taken by ten out eleven Olubadan-in-Council and there is no going back on it, it is the tradition that we need to follow to the latter,” Ajibola said.

Also in his contribution, the Ekarun Olubadan of Ibadaland, High Chief Amidu Ajibade, maintained that the Olubadan stool cannot be politicised,” stressing that the case in court has nothing to do with who becomes the next Olubadan.Amidu said: “Those people and others were promoted during the reign of late Olubadan with their crowns and there was not problem, so there should not be problem now when the next person to late Olubadan needs to be supported to emerge as Olubadan.”

Those people were duly promoted and their promotions were approved by the governor, so why are they now peddling rumours that are not relevant to the issue on ground, after this conference we will submmit our resolutions to Governor Makinde,” Amidu said.In their separate remarks, the Oba Sulimon Akinsola Oladepo, the Alajia of Ajia of Ona-Ara local Government, Oba Dauda Omotosho Alawatan of Awatan of Ido Local Government, Oba Olasunkanmi Abioye the Oniroko of Iroko, Akinyele Local Government commend the Olubadan-in-Council for their peaceful selection of the the next Olubadan.

In his speech, High Chief Balogun said as bonafide indigene of Ibadanland, there is a natural need for him to join the poeple in commiserating with the family of the late Oba Adetuni on his sudden home.“By the way of duty, as the Prime Minster of the Olubadan-in-Council, we owe the people of Ibadanland and Oyo State in general the obligations to inform and update you all on the latest development at our Palace.”

“I, therefore, enjoin you all to discard with all unfounded rumors and insinuations capable of disturbing the peace of Ibadanland, irrespective of the quarter from which such fake news emanate.In line with the traditional practice of Ibadanland when occasion like this arises, the Olubadan-in-Council has been up and doing liaising with the Oyo State Government to ensure that every necessary step to sustain the peace of the City is strictly followed.” Balogun said.

Among chiefs that present at the press conference are, High Chief Abiodun Kola-Daisi, High Chief Eddy Oyewole, Senior Chief Adebayo Akande among others.