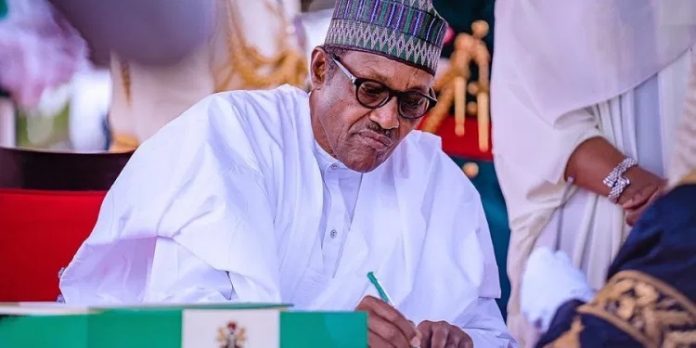 Life may soon return to courts and the Houses of Assembly following agreement reached by the Presidency and governors on the autonomy for the Legislature and the Judiciary.

It was gathered that the demands of all the parties, including what the governors wanted, have been included in the agreement.

But while some of the affected parties have signed the agreement, the Presidential Implementation Committee on the Autonomy for the Judiciary and the Legislature was still expecting the governors’ forum to endorse the pact.

According to a source, who spoke in confidence, the terms of the agreement are fair to all sides.

The conclusion of the agreement was the climax of a six-month negotiation.

Akpata’s committee “established that it is within the powers of the President to issue an Executive Order, including EO10.

The committee also clarified that all “issues raised by the governors have been litigated upon and rested by the courts.”

Based on the verdict of Akpata’s panel and the recommendations of the AGF, a Presidential Implementation Committee on the Autonomy for the Judiciary and the Legislature was set up, with the Special Assistant to the President on Niger Delta Affairs, Sen. Ita Enang, as secretary.

The implementation committee facilitated talks among all parties and the eventual negotiation with Judicial workers, which was coordinated by the Minister of Labour and Employment, Dr. Chris Ngige.

Parties to the negotiation were Ngige; Body of Chief Judges (Represented by the Chief Judges of Zamfara and Bayelsa); the Conference of Speakers of the Houses of Assembly (represented by Bauchi); the Accountant-General of the Federation; the Director-General of the NGF; the President of the Judiciary Staff Union of Nigeria (JUSUN); and the President of the Parliamentary Staff Union among others.

An agreement was reached

A top source said the agreement was fair to all the parties including the presidency and the governors.

The source gave insights into the agreement as follows:

“There will henceforth be direct payment of statutory funds to the Judiciary and State Houses of Assembly from the Federation Account with effect from April allocation. In fact, all relevant accounts have been submitted for the deduction.

“We expect compliance within 45 days or else the President may invoke Executive Order 10 fully.”

Secretary of the Presidential Implementation Committee on the Autonomy for the Judiciary and the Legislature, Sen. Ita Enang said with the agreement, the strike by JUSUN and the Parliamentary Staff Union will soon be called off.

He said: “I assure the public that the question of the strike will soon be resolved. All the parties have signed the agreement.

“All the issues were negotiated and agreed upon by all the parties.”

But the governors have insisted on the fact that Executive Order 10 was unnecessary to implement Section 121(3) of the 1999 Constitution.

They have also demanded disbandment of the Presidential Implementation Committee on the Autonomy of State Legislature and Judiciary.