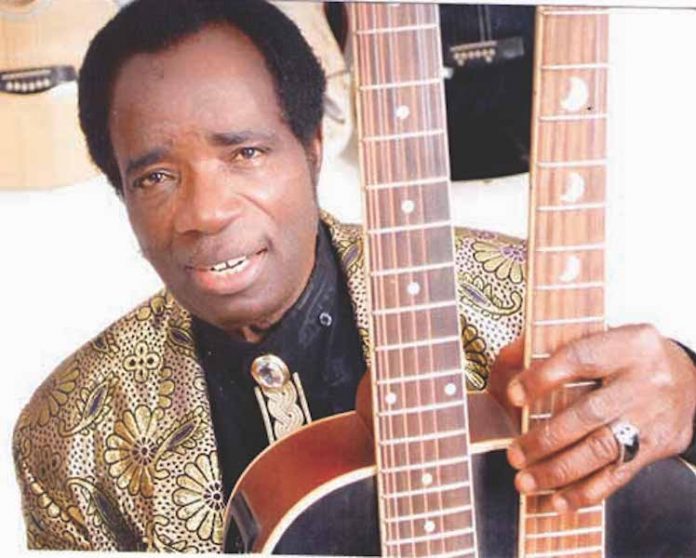 Legendary singer and guitarist, Sir Victor Uwaifo, is dead. ‘Guitar Boy’, as he was popularly called, died six months after celebrating his 80th birthday in March.His son, Uwaifo Peter de Rock, broke the news of his death on his Facebook page.He wrote: “Daddy whyyyyyyyyyy? Why did you leave us? “Prof Sir Victor Uwaifo has gone to restBlack Saturday for me nooow. “One week now after collaborating with me.”Also, confirming the sad news to Sunday Vanguard, Chief Tony Okoroji, Chairman , Copyrights Society of Nigeria, COSON, said he was dumbfounded as he needed to get a clearer picture of what happened to the legendary singer.

Victor Uwaifo is not just a friend to me, he was a man I respected so much. I cannot say much now because I need to know what happened to him, ” Okoroji said.Meanwhile, a source close to the family said the guitarist died after a brief illness.Uwaifo was the first musician in Nigeria to be awarded the National Merit Honours of Member of the Order of the Niger (MON).He was also the first Commissioner for Arts, Culture and Tourism in Nigeria.Born in Benin on March 1, 1941, Uwaifo was one of the foremost highlife musicians in Nigeria. He was trained sculptor, philosopher, poet and musical instrument inventor. His ‘Joromi’, hit song released in 1965, won for Nigeria the first Gold Disc Record ever to come out of the continent of Africa in a competitive world. Uwaifo is the first Benin man to receive the Nigerian National Honours; Member of the Order of the Niger (MON) in 1983, for his contributions to creativity and industry.

He was appointed and sworn-in as Justice of the Peace (JP) 1990. He is also the first and foremost Honourable Commissioner for Arts, Culture and Tourism in Nigeria (Edo State), former lecturer in the Department of Fine and Applied Arts, University of Benin. He was honoured with an award in 2018 by the Association of Nigerian Musicologists for his outstanding music performance and leadership.He was the Silverbird Man of the Year 2015 and honourary Fellow of the Nigerian Academy of Letters, the highest literary academic body in Nigeria. Education: National Diploma (Graphics},Yaba College of Technology, Lagos, 1963, BA Hon (First Class), 1995, Masters degree (MFA) sculpture, 1997, Ph.D (Visual Arts), University of Benin, Nigeria. Project Title: Production of Architectural Sculpture in Nigeria: A Re-Invention of Ancient Benin Royal Altar Pieces into Contemporary Art Using Synthetic Polymer Materials

Uwaifo stands out today, intellectually sound both in mind and body as the most educated performing music icon in the world and the most read contemporary superstar still relevant over 50 years on stage till date. He has over 600 songs and 100 records to his credit with 8 gold and 2 silver awards. Each record is music of serious research and philosophical work equivalent to academic journal. He’s a member of the Performing Rights Society of London (PRS), a trustee of Performing Musicians Association of Nigeria (PMAN) and Copyright Society of Nigeria (COSON). In 2016, Victor Uwaifo was inducted into the Grammy Award Museum in Los Angelis, USA. He has inspired generations of musicians in Nigeria and beyond and still counting.In a WhatsApp chat with Vanguard during the celebration of his 80th birthday, Uwaifo described Joromi as the evergreen song which brought him international prominence.Joromi, composed in the singer’s local dialect, was a five-minute track, and had for its solo, a mastery of skills on a variety of musical instruments including the electric guitar with an accompaniment of percussion and the electric piano.Uwaifo also made use of vocals in making beats, which added more flavour to the song. The song, based on a folktale of the ancient Bini people tells the story of an undefeated warrior, named Joromi who had wrestled and defeated rivals until he was the ultimate warrior on earth. Without any more rivals, he decided to take the battle to the afterlife. Against the counsel of the elders, the fearsome Joromi engaged in battle with a warrior from the afterlife. This personal quest led to his end as he neither returned nor did the people of Bini till this day hear any news about him.

However, 52 years after ‘Joromi’ ruled the airwaves, Uwaifo still regards the song as his greatest hit till date.Little wonder, the living legend once sued singer Simi for N50 million for using the word ‘Joromi’ in her song and as the title of one of her tracks.Buhari mournsPRESIDENT Muhammadu Buhari, last night, condoled with family, friends and associates of Uwaifo.The President, in a statement by his Special Adviser on Media and Publicity, Chief Femi Adesina, said he joined the Nigerian music industry and performing artistes, home and abroad, in mourning the deceased.Buhari said he believed the renowned musician, with global appeal and recognitions, lived for many firsts, which include invitation to the State House by four presidents and Heads of State, and winner of a gold disc in Africa for his song, ‘Joromi’, released in 1965 at the age of 24.