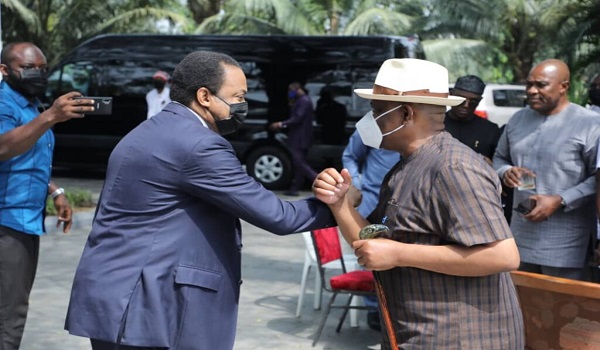 Discussions at a closed-door meeting in Abuja, of Rivers State Governor Nyesom Wike with stakeholders of the Peoples Democratic Party (PDP) in Cross River State have been leaked, thereby generating conflicts among political interest groups in the party.

Wike is believed to be the major financier of the PDP exco structure in Cross River State since Governor Ben Ayade defected to the All Progressives Congress (APC).

The meeting was reportedly meant to address the division that emerged in the PDP, following arguments and counter- arguments on the need to declare the 2023 governorship ticket of the party as zoned to the Southern Senatorial District.

Besides the party leadership in the state refusing to declare the ticket zoned to the South, the friendship of the Rivers  governor with the lawmaker representing Cross River Central Senatorial District, Prof. Sandy Onor, who is a governorship aspirant, was seen as the obvious interest of Wike to see his friend become governor in Cross River State.

Responding to the leaked discussion of the meeting, which was awash in the social media, the Director General of Sen. Sandy Onor Campaign Organisation, Mr. Joe Obi, said all sorts of stories had been scripted and fabricated for selfish ends.

He added: “It is necessary and critical at this juncture to rest your mind with the truth! Yes, a high-powered PDP meeting took place in Abuja a few days ago between Wike, Duke, Imoke, Onor and Bassey.

‘The heart-to-heart fraternal but confidential talks are meant to be classified for now, or truthfully released to confidants. However, what we saw in the social media was a total and conscious misrepresentation of discussion of the meeting, with intent to compromise our distinguished senator and his overwhelmingly popular governorship ambition.

“Please rest your mind, nothing has changed! We are still in the race for the governor.”

In a seeming counter-message from the camp of Sen. Bassey, who is also aspiring for the governorship ticket of the party, his Campaign Director General, Mr. Ekpo Adasaid, said: “These stories are designed to compromise our principal and cast aspersions on his integrity. We condemn this skullduggery in its entirety. Private political meetings are not new, they are the life blood of political processes. Our campaign organisation  respects and understands this and will never leak confidential information.”