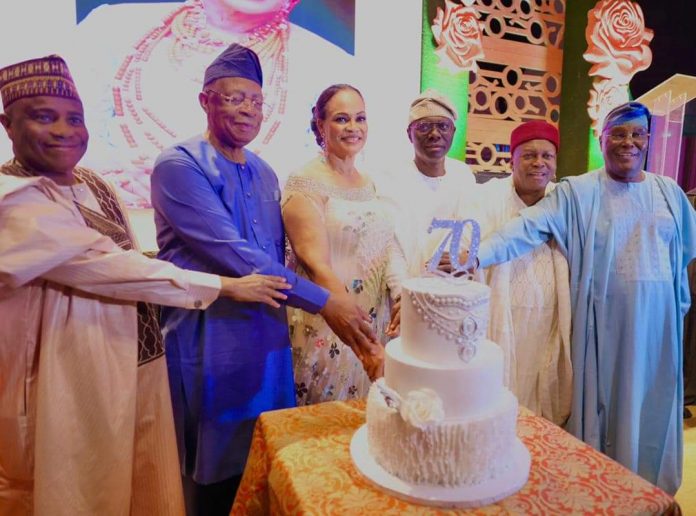 The tributes came in thick and fast on the occasion of Senator Daisy Danjuma’s 70th birthday celebrations last Saturday, August 6, 2022. They were led by no less than President Muhammad Buhari, who praised Sen. Danjuma, wife of Nigeria’s former Chief of Army Staff, Lt-Gen. Theophilus Danjuma (Rtd.), for her commitment to the welfare of the less privileged in society.

In his congratulatory message, the President, who described Sen. Danjuma as an accomplished entrepreneur and philanthropist, noted with admiration her many years of service to the nation and humanity, a passion which, he said, was further reinforced during her time in the National Assembly between 2003 and 2007 where she served as the Chairperson of the Senate Committee on Women Affairs and Youth Development.

It will be recalled that Danjuma was also a member of the Senate Committees on Health, Education, Finance and Land, as well as a member of the Commonwealth Parliamentary Association and Chairperson of the Women and Child’s Rights Committee of the ECOWAS Parliament.

“As you celebrate this milestone,” President Buhari added, “my prayer is that Almighty God will grant you longer life, good health and more wisdom to serve humanity and the country.”

Sen. Daisy Danjuma represented the Edo South Senatorial District in the Senate for a single term between 2003 and 2007.

A prominent part of the TY Danjuma Foundation founded by her husband, she has over the years seen the Foundation positively impact the lives of many. Among other things, the Foundation provides free eye-care services as part of its initiative, ‘Vision for a Brighter Future’, as well as initiates programmes in maternal and child health, neglected tropical diseases, and blindness. In the area of education, the Foundation provides support for Universal Basic Education through teacher training and empowerment, along with scholarships awards to indigent students.

An embodiment of beauty and brains, Mrs. Danjuma is currently Chairman of May and Baker Nigeria Plc, as well as having served on the board of several companies. Between 1999 and 2003, she was the Chairman of South Atlantic Petroleum Limited (SAPETRO), also founded by her husband.

A lawyer by training (having studied at the Ahmadu Bello University in Zaria, where she bagged a degree in Law) she worked at various times as an executive assistant at NAL Merchant Bank, and the Nigerian Television Authority as Company Secretary/Legal Adviser. Danjuma is a member of the International Bar Association, the Nigerian Bar Association, and the International Federation of Women Lawyers. A trustee of the H I D Awolowo Foundation, she chairs the Board of Trustees of the Lagos Public Interest Law Partnership.

She was named the ‘Woman of the Year’ at the 10th edition of the Edo Festival and Award Ceremony held in London, United Kingdom.

Meanwhile, an A-list of personalities from various walks of life converged on the prestigious Eko Hotels and Suites in Lagos to felicitate with Sen. Danjuma and her husband, to usher her formally into the distinguished club of septuagenarians. They included Governor Babajide Sanwo-Olu of Lagos State, a former Nigerian vice-president and the presidential candidate of the People’s Democratic Party, Alhaji Abubakar Atiku, the Presidential candidate of the New Nigeria People’s Party and former Kano State Governor, Rabiu Kwankwaso; Taraba State Governor Darius Ishaku; Gov. Aminu Tambuwal of Sokoto State; Esther Ajayi (popularly known as Iya Adura); Chief Olu Okeowo, and Dr. Atedo Peterside, among others.