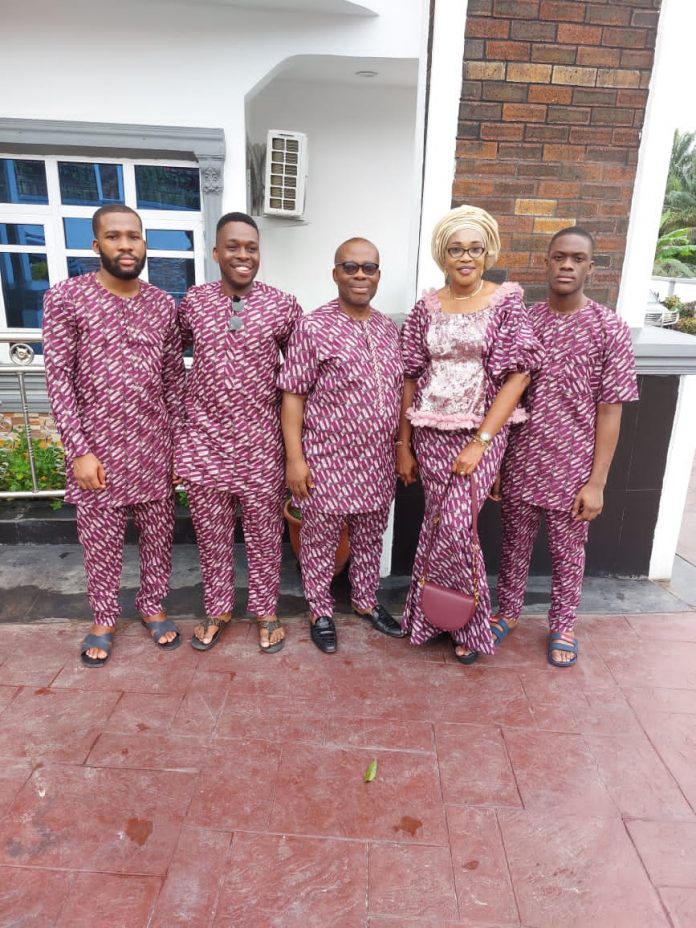 It was a day that is worth two tomorrows at the weekend as the Remains of late Pa Ubani Egbedubi Nwokocha was laid to rest in his home town in Umuosoko Awomukwu, Ikwuano LGA of Abia State amidst a gargantuan assemblage of societal de la cream who came to pay last respect to the late patriarch.

Lawyers from all walks of life were there in torrents. Somebody described the event as a mini NEC of NBA.

Describing the centenarian elder Statesman, the Minister of State, Mines and Steel Development, Dr. Uchechukwu Sampson Ogah while responding to questions from journalists said that late Pa Ubani lived a fulfilled life and left many good legacies, including his good friend and brother Dr. Monday Ubani who is known to be a voice to the voiceless Nigerian masses. He eulogized Dr. Ubani for being a true son of his late father.

He said it was instructive that he grace the occasion given the close bond of relationship that exists between him and Dr. Ubani.
He thanked Dr. Ubani for his immense contributions in the development of the country.

In his letter of condolence, the Chief Whip of the Senate and Senator representing Abia North at the Red Chamber, Senator Orji Uzor Kalu who was also present at the venue of the event had described ‘Egoro’ as one that stamped indelible footprint in the sands of time.
He said ” While death at any age is sad, we are however consoled by the fact that he lived a fulfilled life as a loving husband, caring Father, community leader, Devout Christian and philanthropist”

Adding her Voice, Senator Nkechi Nwaogu who attended the ceremony enjoined the Chief Mourner to take comfort in knowing that late Pa Ubani is resting in the arms of the Lord. She said
“Though his death obviously has created a big vacuum in the family but be strongly consoled by the fact that he lived a fulfilled life.

Rep. Sam Onuigbo, who arrived in the company of entourage had earlier through his message of condolences commended the Late icon for playing his fatherly role well in raising up his children the way he did.
He eulogized Dr. Ubani for the many impacts he has made in the society. He added ” … Egoro Oti must have transitioned to eternal glory with a smile on his face and a heart full of joy and pride…”

Later in his sermon, the former Supritendent of Assemblies of God Nigeria, Rev. Dr. Chidi Okoroafor enjoined the congregation to live a life with eternity in mind. Citing the book of Genesis chapter five, the respected Clergy said “…we must all return to the dust…. Make sure you live well because nobody has a certificate of occupancy to life”

Rev. Okoroafor went further to say that there is no amount of wealth that people will acquire that will prevent them from dying.
He made reference to Biblical king Solomon, who, after enjoying all the pleasurable things of life in the end summarized the book of Ecclesiastes with instructions that men should fear God and keep His commandments as that remains the whole duty of man.

Speaking about his Father, Ubani, who is currently the chairman of Section on Public Interest and Development Law, NBA– SPIDEL, said that his father’s act of philanthropy has taught him that one does not need to be a multi millionaire before he or she can help those in need.
“…even in my father’s low state, he was able to help those in need… The culture of philanthropy, culture of kindness, culture of good heart were part of what my father represented…”

Asked whether the man he is today has any bearing with home training. The former 2nd Vice NBA President has this to say ” If you have a son that stayed with you for many years until he becomes a man and probably goes to school in order to get educated and then comes out of school and begins to live on his own as a son or daughter, that means there are certain things you must have impacted in his life that will become like a character trait in which he must use to pursue life and become successful….the way I reason, the way I do things; my character generally and my friendliness with people, my courage and determination to succeed, and even the character of being multi talented were all derived from my father because there was virtually nothing that my father didn’t know how to do…”

Playing the memory footage of his late father, Monday Ubani recounted how his father was sacked when his father newly brought him to Lagos to stay with him.

Dr. Ubani said that his father in his effort to take care of his only son that joined him in Lagos extended his holidays by two days and on getting back to Lagos was relieved of his job by his white employer; a situation he said brought hardship and later forced them to relocate to Opebi where they stayed for a lengthy period of years.

Ubani in his word of advice enjoined parents to live an examplary life while bearing in mind that young people will always want to do what they see their parents do.
He stressed the need for parents to raise their children in the fear of God. Adding that this can help in curtailing the get-rich-quick syndrome that has ravaged the society.

On 2023 general election, Ubani said Nigerians must not repeat the age-long mistake of electing incompetent leaders into office. He added that the future of Abia State and Nigeria at large will be determined by the kind of leaders that will take over the mantle of leadership.

Dr. Ubani thanked everyone who contributed in one way or the order to the success of the burial of his late father.

Indeed, Egoro was buried in a blaze of glory. The villagers confessed that they have never seen the kind and number of dignitaries that attended the ceremony like this ever before now.