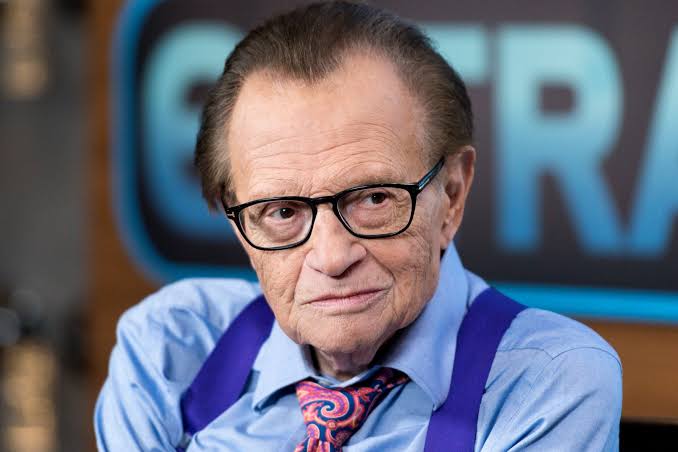 LARRY KING – EXIT OF AN ICON – By Austin Inyang

He was born Lawrence Harvey Zeiger, but it was as Larry King that he burst into millions of living rooms with his folksy style of presentation, his penetrating insights, his hands-on engagement with the subjects of his direct and non-confrontational interviews, his crackling humour and …yes, that infectious smile. In a career spanning 50 years, Larry King explored countless social, political and cultural topics and trends in his native America and globally, and interviewed tens of thousands of personalities both famous and unsung, through his legendary syndicated show, The Larry King Show, which ran on many cable networks – most notably CNN – for many years. King, who died on Saturday, January 23, 2021 at the age of 87, was the recipient of numerous awards for his work as one of the foremost TV/radio hosts of our generation.

Born in the New York suburb of Brooklyn on November 19, 1933, King was one of two children of Jewish parents who migrated from the eastern European nation of Belarus. His father died when Larry was just 9 – leaving a family that had to depend on welfare for survival. From an early age, Larry had always been fascinated by radio broadcasting – and his inability to continue his schooling was the excuse he needed to pursue his interest in that vocation. On the advice of a friend, he traveled to Miama, Florida which was a growing media market with openings for inexperienced broadcasters at the time, and after initial setbacks, he gained his first job in radio – but only as a cleaner. His break came when one of the station’s announcers abruptly quit, and King was put on the air. He made his first broadcast was on May 1, 1957 as a DJ.

He changed his name from Larry Zeigler to King, from an advertisement in a newspaper. Within two years, he legally changed his name to Larry King. Over time, his Miami radio show brought him local attention – as he interviewed both celebrity guests and political figures, and moderated debates on important local issues of the day. During his time, in Mami, he also became a moderator in America’s National Football League, as well as a newspaper columnist.

In 1978, King went national on a nightly coast-to-coast broadcast, and rapidly developed a devoted audience. Known as the Larry King Show, it featured King interviewing a guest for the first 90 minutes, with callers asking questions that continued the interview for another 90 minutes.

Larry King Live, the iconic show that cemented his legend, began on CNN in June 1985. On the show, King hosted a broad range of guests, from UFO conspiracy theorists and psychics, to prominent politicians and entertainment industry figures. Two of Larry King’s best remembered interviews involved political figures. In 1992, billionaire Ross Perot announced his presidential bid on the show, and in 1993, a debate between Al Gore and Perot became CNN’s most-watched segment.

In June, 2010, King stepped down as the host of Larry King Live, after 25 years in the role.The final edition of Larry King Live aired on December 16, 2010, concluding with his last thoughts and a thank you to his audience for watching and supporting him over the years.

In 1987 he suffered a heart attack, after which he founded the Larry King Cardiac Foundation, a non profit organization which paid for life-saving cardiac procedures for people who otherwise would not be able to afford them.

Larry King’s love life was as prolific as his professional one. He was married eight times, to seven women, the first of whom was his high-school sweetheart Freda Miller, who he married in 1952 at age 19. Like many of his other unions, it was short lived, and ended the following year, when their parents reportedly had the marriage annulled. He went on to marry Annette Kaye; Alene Akins; Mary Francis “Mickey” Stuphins; Akins (a second time); Sharon Lepore; Julie Alexander; Shawn Southwick. From his seven wives, King had 5 children and 9 grandchildren, as well as 4 great-grandchildren. Sadly, though, his children with Alene (Andy and Chaia), died within weeks of each other in August 2020, Andy at 65 from a heart attack and Chaia at 51 from lung cancer.

On January 2, 2021, it was revealed that King had been hospitalized ten days earlier in a Los Angeles hospital after testing positive for COVID-19. On January 23, he died at Cedars-Sinai Medical Center in Los Angeles.