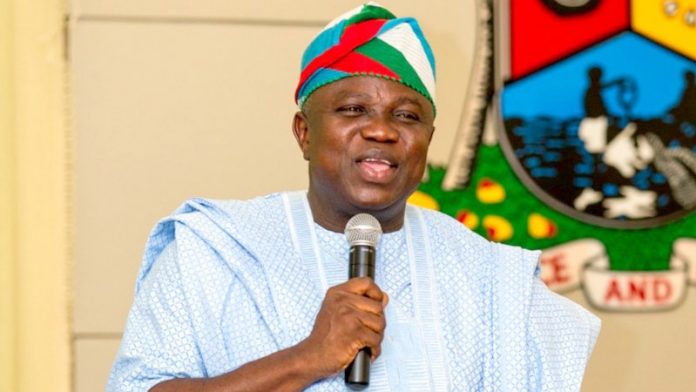 Lagos State Governor, Mr. Akinwunmi Ambode on Wednesday heaped praises on the Mountain of Fire and Miracles Ministries (MFM) Football Club for returning the State back to the prestigious CAF Champions League sixteen years after a team from the State participated in the tournament.

Speaking at Lagos House in Alausa, Ikeja when he received MFM FC alongside top officials of the Nigeria Football Federation (NFF) as well as some ex-internationals, Governor Ambode said it was gratifying that a team from the State would be participating in the 2018 edition of the continental tournament after such a long time, just as he pledged to assist the team with the necessary support to ensure successful campaign at the championship.

While congratulating the team for the feat, Governor Ambode particularly acknowledged and saluted the vision of MFM General Overseer, Pastor Kayode Olukoya who founded the team ten years ago, saying that the State Government was proud to associate with his idea of meaningfully engaging the youths to contribute positively to the society.

Responding to some requests by the MFM FC, Governor Ambode donated N25milion to the footballers and officials of the club for qualifying for the CAF Champions League and another N25million to ensure hitch-free campaign, as well as adequately prepare for the tournament.

Already, the Governor said the State Sports Commission had been directed to ensure that the Agege Stadium, which is the home-ground being used by MFM FC, be put in good shape to meet up with CAF standard before inspection in December.

“I want to also say that we have directed our sports team and the Sports Commission to make sure that everything needed, just as earlier requested, to ensure that Agege Stadium is certified by CAF is done,” Governor Ambode said.

While recalling the promise he made to the people during electioneering to use tourism, hospitality, entertainment and arts as well as sports for excellence, Governor Ambode said the feat by the team aptly conform with the vision and plan of the State Government to use sports to advance the economy and positively engage the youths.

According to him, “We need sports to use it as an instrument to build the economy of Lagos and also direct the energy of our younger ones to things that are very positive as exemplified by what is happening today. Beyond football, they continue to use it for their own mental ability to be able to be proud future leaders in this country and that is what we are trying to say.”

“It is a way of propagating new leaders and people who are properly disciplined because you need a lot of discipline to play football. There are things that are not taught in schools that you actually find in sports and that is the direction we are trying to go with youth development in this State and so I like to commend the team and the officials,” the Governor said.

While speaking on other plans for sports development in the State, Governor Ambode said aside the ongoing transformation of Onikan Stadium to world class standard, a major upgrade of the Teslim Balogun Stadium would soon be carried out, while efforts were already ongoing for the Lagos Games Village located along the Lekki-Epe axis to commence in 2018.

Also, the Governor said his administration would soon invite stakeholders in the sports sector to discuss modalities for the Lagos Premier League which, according to him, would have twenty teams.

However, Governor Ambode charged the MFM FC to be good ambassadors of the State and be at their best at the tournament.

Earlier, MFM Director of Sports Worldwide, Mr. Godwin Enakhena commended Governor Ambode and indeed the State Government for the support so far extended to the team, saying the assistance contributed to the feat achieved by the team to play at the continental level.

He recalled how the State Government released Agege Stadium to MFM FC free of charge for use as home-ground and other security arrangements, as well as logistics, adding that the immense support of the government was well appreciated.

Enakhena, who spoke on behalf of Pastor Olukoya, however, urged the State Government to continue to support the team especially financial support and also make Agege Stadium suitable for CAF Champions League, the requests which were instantly granted by the Governor.