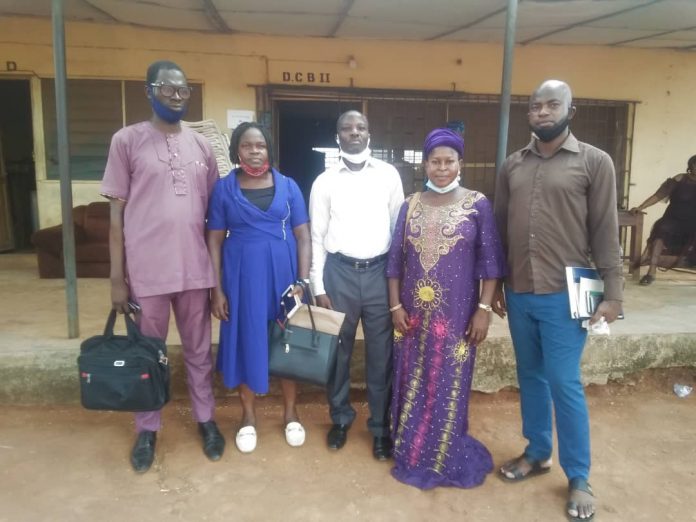 Yinka Ayimonche, Esq was called to the Nigerian Bar in 2007, he has been in detention at Igbogbo Police Station in Ikorodu since Thursday 4th February, 2021.

Yinka had earlier been detained at IRT Ikeja on the 3rd February on the ground that he was to produce his client who is under investigation at IRT and on whose behalf a suit for Enforcement of Fundamental Right (suit no LD/1017MFHR/2020) is pending in court.

Yinka is being detained at the behest of a team headed by one James Yahaya who claims to be from IG Monitoring Unit in Abuja. The IRT boss at Ikeja made it clear that he could not detain Yinka Ayimonche beyond the legal limit at Ikeja, so James Yahaya resorted to having him detained at Igbogbo Police Station in Ikorodu.

Yinka Ayimonche has been asked to pay the sum of #3,000,000 or produce his client if he wants to be released from Police custody.

Mr. Sojirin mobilised other lawyers and accompanied by the Vice Chairman of NBA Ikorodu Branch, the YLF Chairman of the Branch and other PDSS Volunteers visited Yinka in Detention

Mr. Sojirin reports that “We (5 lawyers from NBA ikorodu including our Vice Chairman) met with the detained lawyer – Yinka Ayemochie who is a lawyer in private practice with his office in Lekki, Lagos. Yinka informed us that he represented a company based in China in a case of Theft of goods reported to the IG, IRT and stood surety for the Company’s representative in Nigeria. He said the case was later resolved when police found that there was no case against the company as the goods in question had been legally repatriated back to China. Yinka was picked up by IRT led by one Insp. James Yahaya with telephone no 08068898331 ostensibly in order to extort money from him and asked to produce his client.”

Mr. Sojirin who visited Yinka today (12th February 2021) goes on to report that:

“Yinka was detained here in Igbogbo Division, ikorodu since 5th February without any court order. I called the said James Yahaya but he rudely told me to come and meet him at Ajah or contact their Abuja office concerning the lawyer’s case. The Igbogbo DPO who said he was attending a meeting at Zone 2 said he cannot do anything about the case since it’s a Abuja Police HQ case”

Segun Sojirin goes on to state that “I learnt that the Inspector in charge of the case was asking for 25,000 dollars to cover cost they allegedly Incurred in the course of investigating the alleged theft as incidental charges before he can release the lawyer.”

It was gathered that the original case was for the theft of imported iron pallets imported from China for use at Ajaokuta steel which contract was later cancelled by the FGN and to avoid further demurrage at the port, the importing company in China through the chairman briefed an agent here in Nigeria to first warehouse the goods and later export it back to China which was duly done and a letter acknowledging receipt was sent to Nigeria.

The Nigerian agent (whom the lawyer stood surety for) was harassed by the police on a trumped up petition from a certain director of the China company, who directed a petition to the IG’s office in Abuja.

Bayo Akinlade Esq, the immediate past Chairman of NBA Ikorodu Branch who facilitates training for PDSS volunteer Lawyers remarks that this trend of police arresting and detaining Suspects beyond the time permitted by law must stop. If the police is there to uphold the law they cannot be seen to be violating the same law.

“I am not happy with the way the Police continues to violate the constitution. What moral right do they have to carry out their duties when they fail to uphold simple constitutional provisions?. The Administration of Criminal Justice Act specifically states the proceedure for arrest and Detention but the police but they violate these provisions with impunity”

Mr. Akinlade goes further to call for the removal of Inspector Yahaya, the DPO of Igbogbo Police Station and any high ranking Police officer involved in this extortive behaviour, for the gross abuse of Police powers and for violating constitutional Provisions.