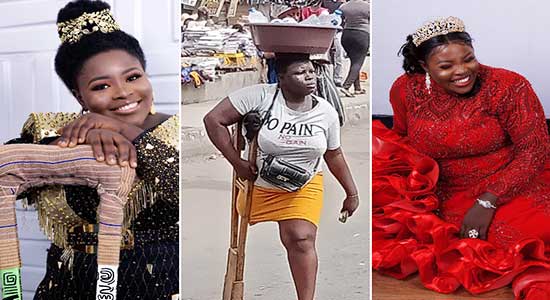 Mary Daniel, a 27-year-old amputee hawker, has collected over N25 million in donations from generous people both within and outside Nigeria.

A committee comprised of a non-governmental organization, Irede Foundation, a lawyer from the state Ministry of Justice, and a social worker from the Ministry of Youth and Social Services is finalizing plans to develop her company for the single mother, who used to hawk bottled water in traffic in the Oshodi region of Lagos.

On Friday, the Kogi-born woman told our correspondent that she planned to open a supermarket and hire two people for her 27th birthday.

Daniel’s status took a dramatic turnaround after her moving story was reported.

For fear that she might fall prey to fraudsters due to huge donations pouring into her bank account, the Lagos State Government took over her welfare and put her in protective custody.

On Wednesday, the Special Adviser to Governor Babajide Sanwo-Olu on Civic Engagement, Aderemi Adebowale, handed her over to a committee, including Irede Foundation and Onu (King) of Igala in Lagos, Mr Sanni Yakubu, to assist her in setting up a business.

The handover took place in the presence of a senior police officer acting in the capacity of Commissioner of Police Hakeem Odumosu.

“When Mary Daniel came here on April 13 for protection and protection because of the donations she received, she had over N14m in her account,” Adebowale said.
But as of today (Wednesday), she has more than N25m.
Even though she is not from this state, we do want to protect her.
Today, Civic Engagement transferred her to a special worker in the Ministry of Youth and Social Services, a lawyer in the Ministry of Justice, and an NGO called the Irede Foundation.”

The SA claimed that Daniel would live with Yakubu until she found her own place and started her own company.
She added, “We have protected her and handed her over to people that will help her plan her life going forward.”

BREAKING: Wike Governor of Rivers State reviews curfew from 7 pm to 6 am