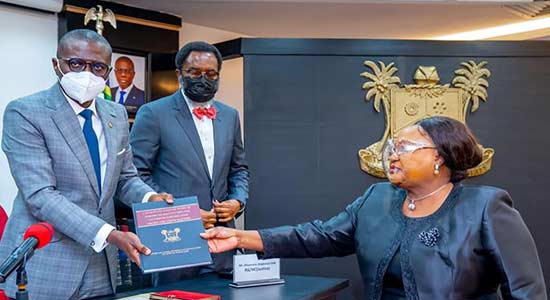 Lagos State Governor Babajide Sanwo-Olu has received the final reports of the Judicial Panel of Inquiry and Restitution for Victims of Special Anti-Robbery Squad (SARS) related Abuses in the state. The reports were submitted to the governor at the government house, Ikeja, Lagos on Monday.

The panel submitted two sets of reports – a consolidated report on police brutality cases and one on the Lekki incident investigation.

On October 19, 2020, as part of recommendations put forward during the #EndSARS protests, the state government inaugurated the judicial panel to investigate petitions on police brutality in the state.

Receiving the reports from the seven-man panel which was chaired by retired Justice Doris Okuwobi, Governor Sanwo-Olu said it is the beginning of the ‘difficult process of proper reconciliation and restitution.’

The governor commended the panel for their commitment and steadfastness as well as Lagosians for putting a closure to the matters raised by the #EndSARS movement in the state, assuring them that the recommendation would be communicated to the general public and also put on the government record.

The governor constituted a four-man committee which includes the state’s Attorney General and Commissioner for Justice, Moyosore Onigbanjo, Commissioner for Youth and Social Development, Olusegun Dawodu, Special Adviser to Governor on Work, and Permanent Secretary of cabinet office, to work on the reports and come out with a white paper within two weeks which will be available to the state executives meeting.

He also hinted that the reports would be sent to the National Economic Council for consideration.

‘I’m believing and trusting that this process will help us start the very difficult process of proper reconciliation, restitution, bringing together of anyone that must have been one form or the other being affected,’ he stated.

‘By either the police or any of our citizens that must have been wronged by one form or the other, the process of healing, I imagine, with the submission of this panel report, will start that process.’

The panel sitting was initially meant to last for six months but the period of proceedings stretched into one year.

The panel concluded its sitting on October 18 and said its findings and recommendations would be submitted to the state government.

Doris Okuwobi, the chairperson of the panel, had said 186 of the 252 petitions submitted were deliberated upon.