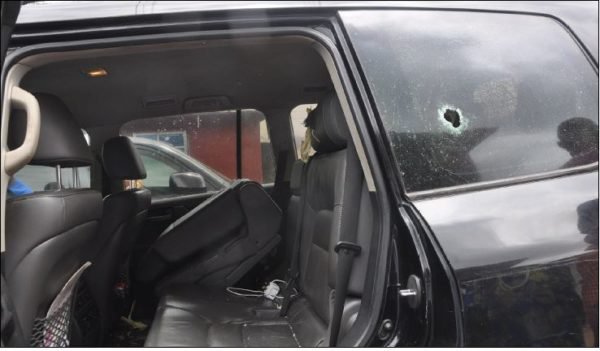 The residents of Adelayo Street in Jah-Michael community, Olorunda area of Lagos State, have been thrown into confusion following the discovery of the lifeless body of eight children inside a Honda Pilot jeep with registration number AAA157BD parked inside a fenced house.

The lifeless body of the children aged between four to nine years old, were discovered about 5p.m., on Saturday evening when Saliat Kazeem, who wanted to feed her granddaughter raised the alarm that the children were trapped inside the vehicle.

Saliat Kazeem, the owner of the building where the incident happened was asleep when the children, including her granddaughter entered and got trapped inside the vehicle and died of suffocation. yesterday, relatives of family of the victims were at the scene, they opened the gate to inspect the compound and held meetings, insinuating that there was more than met the eyes.

In the compound, shattered windscreen from the vehicle littered the scene.Glasses from the window of building which was destroyed by irate residents were also scattered on the ground. It was learned that the eight children involved are from four different families.

According to Azeez, it was actually when the owner of the building, Saliat Kazeem woke up that she discovered the children, including her granddaughter whom she wanted to feed were inside the vehicle.“When I heard of the incident, I rushed there like other residents, we found that some of the children were still alive, they were still breathing, we were telling them to rush them to the hospital, but they were wasting time, they didn’t do anything till it was late. By the time they eventually stated going to the hospital, the grand child of Saliat Kazeem died on the way.

Yesterday was like war as young men in the community wanted to set the house ablaze. Relatives of the affected families attacked people who were passing bye.”According to a community leader, who said, “The aggrieved youths almost lynched Saliat Kazeem, the owner of the vehicle and building but for the police, who intervened and sealed the building.

Yet to understand what was happening, a little boy who identified himself as AbdulKareem, said his two siblings, Aisha and Farida were among the children who died inside the vehicle.He said: “My two siblings were among the children who suffocated in the vehicle. Foamy substances were coming out of their mouths.”Lamenting, another resident, Adetayo Ojo, said: “The gate is hardly open, anytime we pass through this street, the gate is always locked. So, I wonder what happened that it was opened and eight children went there to play.

Confirming the incident, the spokesperson Lagos state police command, Adekunle Ajisebutu, said: “Eight children were said to have mistakenly locked themselves in an abandoned car while playing. Their bodies have been recovered and deposited at the Badagry General Hospital’s morgue for autopsy, so as to determine the actual cause of death.

Notwithstanding the report made to the Police, the Commissioner of Police, Mr. Hakeem Odumosu, has ordered a thorough and speedy investigation into the circumstances surrounding their death.”The CP also commiserates with the families of the victims.”