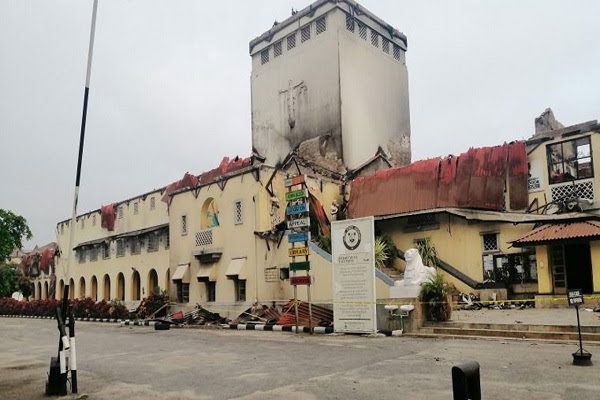 The Lagos State Rebuilding Trust Fund has begun reconstructing the Igbosere High Court, which was razed down by hijackers of the #EndSARS protest on October 21, 2020. It was on Wednesday observed two heavy Caterpillar excavators demolishing the charred remains of the multi-courtroom structure, reputed as the country’s oldest and most recognisable judicial building.A signboard outside the premises – which has now been covered – also advertised the reconstruction.

Originally called the Supreme Court with its jurisdiction limited to Lagos, the court’s existence dates back to the period of the cession of Lagos to the British Government when Lagos was known as a British Protectorate.The Lagos Treaty of Cession of August 6, 1861, was between the British Empire and Oba Dosunmu of Lagos, wherein Dosunmu, under the threat of military bombardment, ceded Lagos Island to Britain, whilst retaining the title and powers of Oba, subject to English laws.But during the protest, scores of hoodlums made their way onto the premises, carting away computers, printers, files, fans, air conditioners and other items.A viral video also showed one of the thugs dressed in a judge’s robe and wig, wielding a machete.

The rioters then set the ‘temple of justice’ ablaze before fleeing.The hoodlums also destroyed the nearby Igbosere Magistrates’ Court, the world-class Forensic DNA Centre (West Africa’s first), police stations, and other public and private infrastructure across Lagos.Governor Babajide Sanwo-Olu on November 4, 2020, signed an Executive Order to establish an eight-man Lagos State Rebuilding Trust Fund, headed by Mr. Yemi Cardoso to rebuild the razed edifice.But, while the Fund quietly set about its duties, the structure has remained a relic, with burnt vehicles and other exhibits littering the premises.

On Monday, however, construction workers began clearing the debris and, yesterday commenced demolition of the courthouse building proper.The chairman of the Lagos State Rebuilding Trust Fund, Yemi Cardoso, explained last September that the Fund started as a government thing, but is now a public-private partnership.“It is now a Public-Private Partnership (PPP), which has its own status and laws for procurement policies and others. The governance and the legality of it will obviously face its own time.

If it is a committee of government, it would have started work immediately but in this case, you have to ensure that it goes through CAC and other necessary procedure,” Cardoso said.He had yet to reply to The enquiries on the timeline and cost of the rebuilding projects as of the time of filing this report, but a source in the Ministry of Information confirmed the development.He said the committee would officially brief the press at a later date.Other members of the rebuilding committee are the Managing Partner, Olaniwun Ajayi LP, Konyinsola Ajayi; Chief Executive Officer of Sterling Bank, Abubakar Suleiman; Co-Founder and CEO, Flutterwave, Gbenga Agboola; Vice Chairman, Standard Chartered Bank, Bola Adesola – all representing the private sector – and a representative of an International Donor Agency.

The Commissioner for Economic Planning and Budget, Sam Egube, and Permanent Secretary, Ministry of Works and Infrastructure, Jimi Hotonou, are members of the board representing the public sector.