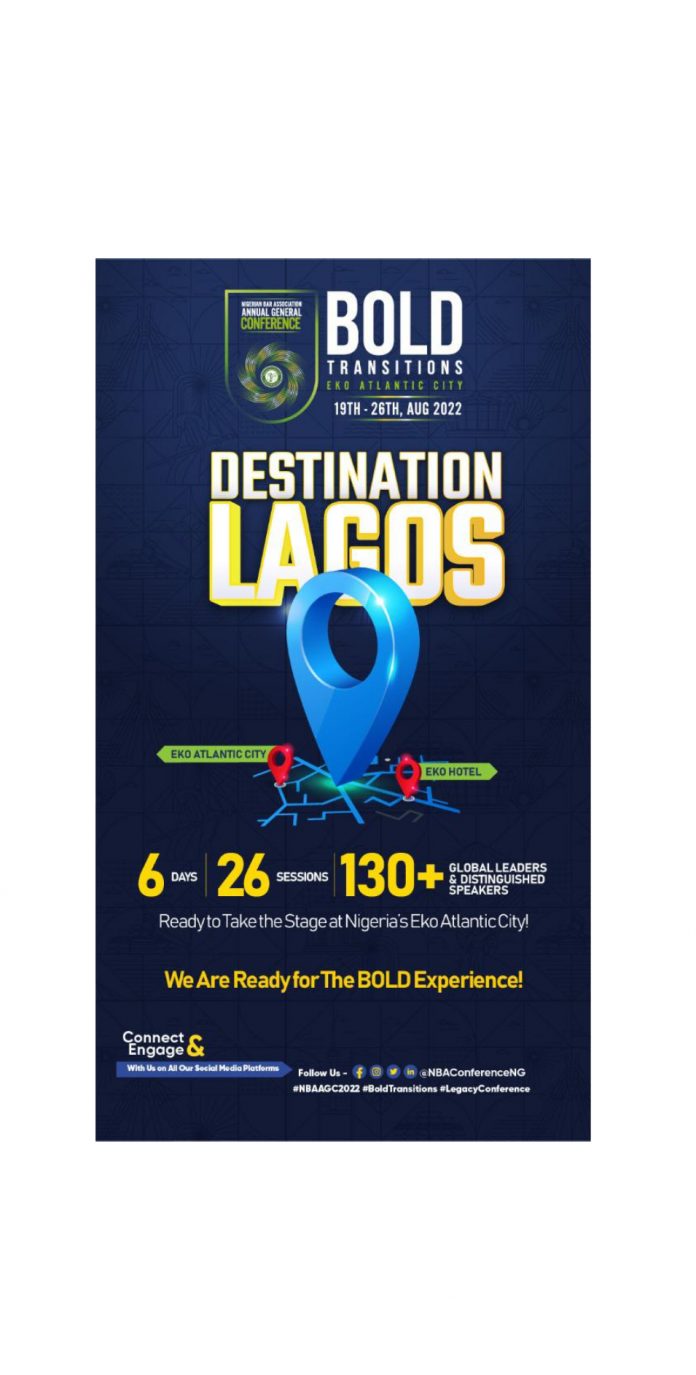 If Lagos, Nigeria’s bustling commercial capital, were human, its mood right now would be one of excitement as it anticipates a convergence of lawyers from all over the country for the 2022 Annual General Conference of the Nigerian Bar Association.

Nigeria’s ‘Centre of Excellence’, the epicentre of its thriving technology sector and the lifeblood of its civil society is all set to not just host the learned ladies and gentlemen to an exceptional conference but also offer them a piece of the sights and sounds of the megacity that houses one of Africa’s largest and busiest seaports.

The NBA Annual General Conference (AGC) has over the years been known to be the largest gathering of lawyers anywhere in the world. This year’s conference, themed “Bold Transitions”, is slated for 19th to 26th August, 2022. The Technical Committee on Conference Planning (TCCP), led by Tobenna Erojikwe as Chairman, has promised to deliver a legacy conference that sets a standard that will become a benchmark for subsequent NBA conferences.

In keeping with this promise, the TCCP has chosen Eko Atlantic, an ambitious new city on the edge of Victoria Island, the financial centre of the metropolis renowned for its beach resorts, boutiques and nightlife, as the host of most of the conference events.

The choice of Eko Atlantic City is a bold statement by the Olumide Akpata-led NBA. One of the world’s cutting-edge new cities, Eko Atlantic has variously been described as the new economic capital of Africa and Africa’s Manhattan because it is planned to be the size of Manhattan’s skyscraper district. The city stands on 10 million square metres of land reclaimed from the Atlantic Ocean and protected by the Great Wall of Lagos, an 8.5-kilometre long sea wall constructed primarily of rock and faced with concrete accropode armour.

Eko Atlantic City is being developed to be self-sufficient and sustainable to meet the needs for financial, commercial, residential and tourist accommodations, with infrastructure (state-of-the-art urban design, its own power generation, clean water, advanced telecommunications, spacious roads, and tree-lined streets) in line with modern and environmental standards.

But Lagos offers even much more. Apart from the exceptional beauty of the audacious Eko Atlantic City, conference attendees will certainly enjoy the sight of the Lagos skyline, the tallest in Nigeria, its diverse architectural styles ranging from tropical and vernacular, Brazilian, to colonial European and ultramodern buildings, as well as the sounds of the city’s high energy. After all, Lagos is still mini Nigeria, a melting pot of the country’s over 250 ethnic nationalities and cultures.

The TCCP has indicated that the conference will begin with Jumaat prayer on Friday, 19th August, 2022. Registrations will also go on on that day.

According to a programme of events released by the TCCP, there will be a health walk beginning at 7am on Saturday. On Sunday, 21st August, there will be a Christian Service at Our Lady of Perpetual Help Catholic Church, Victoria Island, followed by a cocktail to be hosted by the Chief Judge of Lagos State, and the opening of Friendship Centre.

The opening ceremony of the conference proper will come on Monday, 22nd August, 2022, where Chimamanda Ngozi Adichie, author of Purple Hibiscus, Half of a Yellow Sun, Americanah, and several other works, will deliver the Keynote Speech.

The technical sessions, which will come after the opening ceremony, will run from Monday through Wednesday and will include the highly anticipated Presidential Candidates’ session, where presidential candidates of the major political parties in the 2023 elections will speak on “Democratic Transitions in 21st Century Nigeria: 2023 and Beyond”.

The spices on the conference include the inter-branch male and female football matches, the NBA President’s Dinner on Tuesday, 23rd August, the closing party on Wednesday, 24th August, among others.

Thursday, 25th August will be the NBA Annual General Meeting for 2022, and the conference will conclude on Friday, 26th August with the swearing-in of a new exco to pilot the affairs of the NBA for the next two years, marking the end of the Olumide Akpata administration.