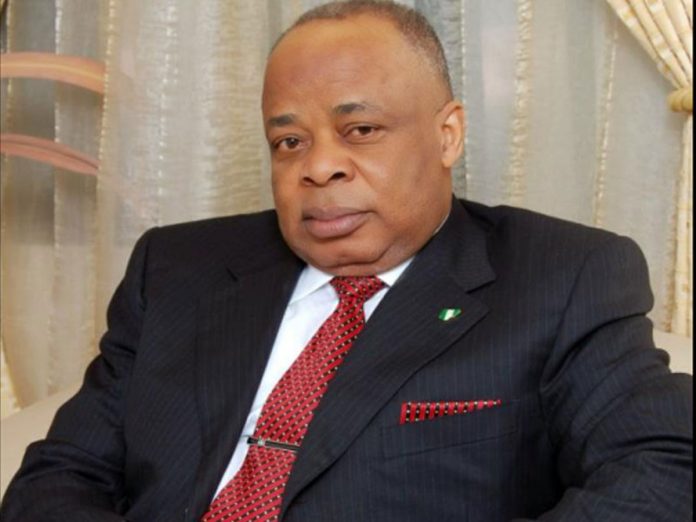 He spoke on the issue in his newly released book, ‘Standing Strong: Legislative Reforms, Third Term and Other Issues of the 5th Senate’.Nnamani said he bowed to the former governor’s request the first time — in 2003 — but Ekweremadu lost the senate presidency contest to Adolphus Wabara.The former senate president said he agreed, because he didn’t want to “rock the boat and create political tension”.

“While I was encouraged by my colleagues to run for the position, my governor, Chimaroke Nnamani, was opposed to it,” he wrote.“His preferred candidate for that position was a certain Ike Ekweramadu, the senator representing Enugu west senatorial zone in the upper chamber.“The governor made it clear to me that the man, who was also a first-term senator, was his candidate for senate president.

“Going by the support I was receiving from my colleagues, I could have ignored my governor and run for the position. And perhaps I could have won. But I did not want to rock the boat and create political tension in my state. So, I deferred to the governor and withdrew from the contest for the position.”Two years later, Wabara resigned after he got into trouble over allegations of bribery.With the apex position at the red chamber vacant, Nnamani expressed interest, but he said Chimaroke again “ordered” him to step aside for Ekweremadu.This time around, Nnamani said he systematically declined.

In the new race for senate president with only senators from my state, Enugu, potentially running, I felt confident that I stood in better stead than others to win and lead the distinguishing assembly,” he wrote.“But again, my governor, Chimaroke Nnamani, appeared on the scene. Again, he advised… no, ordered… that I must not run but instead must support senator Ekweremadu.“The audacity with which he delivered his directive was beyond belief. While ordering me to hands-off the race, he said, to my anger and utter consternation, that he had sent Ekweremadu to the senate specifically for that role.”Nnamani also said his emergence as head of the national assembly in 2005 gave the legislators the opportunity to ward off the “domineering executive control” during the fifth senate.

“By my election to the seat of senate president, the senate was serving notice that it was ready to purge itself of puppet leadership,” he wrote.“The senators were rebelling against what they saw as undue interference in their affairs by the executive.“They clearly wanted an independent legislature as enshrined in the constitution. They saw in my emergence an opportunity to do that, to break free from the stranglehold of a domineering executive branch.“By defying the executive and rejecting its interference in choosing its leadership, the Fifth senate metamorphosed from one in which the presidency remote-controlled its business, to one where senators were determined to carry out their law-making and oversight functions independently.”