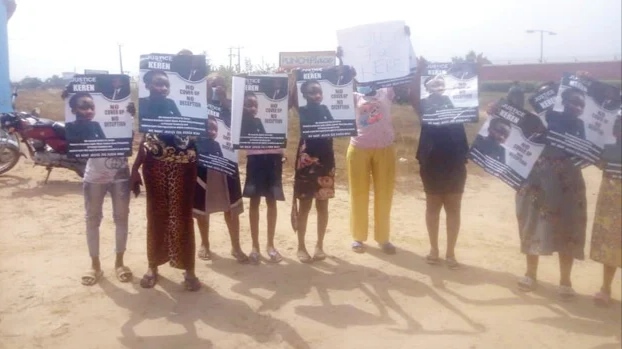 Members of a group, Movement for Justice for Karen, have protested against the alleged delay in justice for a pupil of the Premier Academy, Lugbe, Abuja, Karen Akpagher, who died after she was allegedly raped.The 14-year-old pupil was alleged to have died of an infection after a condom was found in her private part.

The SS1 pupil was alleged to have been sexually abused before she was withdrawn from school by her mother, Mrs Vihimga Akpagher, on June 19, 2021, for treatment.Premier Academy, however, said the abuse happened after she left its premises.Karen died two days later at a hospital in the Wuse 2 area of Abuja.During a protest on Tuesday an activist, Ikem Anthony, accused the police and the school of not being proactive.He said, “Late Karen was a student of Premier Academy, Lugbe, Abuja, and died in June 2021 and till now, we have not heard anything. No arrest, nothing whatsoever.

“We are calling on the police to do the needful and not be biased in their investigation of the case. We want them to fish out the perpetrators and charge them to court.”Another member of the group, John Olobayo, a lawyer, wondered why no arrest had been made in the case.He said, “This incident happened over seven months ago and the police have not made arrests.

This is a failure of our justice system. This was an underage girl child who was raped. We are asking the police to wake up and do their job. We want them to hold the people who did this accountable.”Another member of the group, Sunday Ifeanyi, said, “This act should not repeat itself again anywhere in the country.”