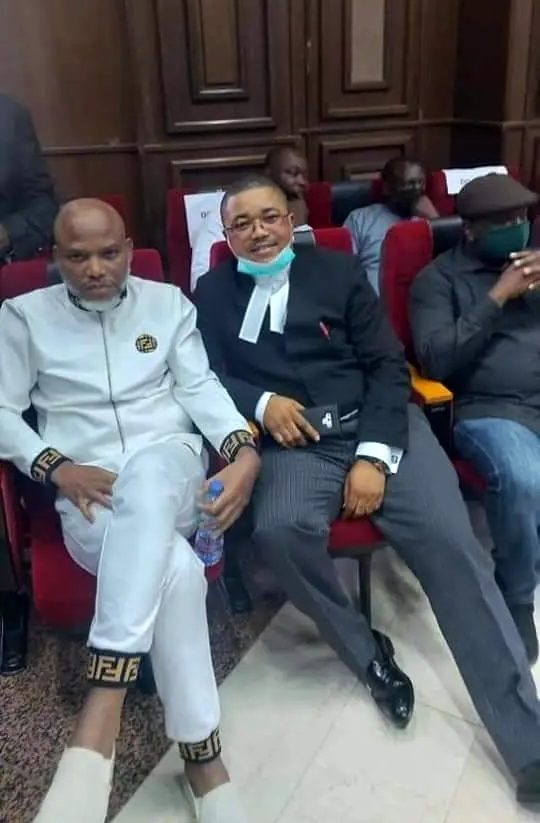 The legal team of the Indigenous People of Biafra, IPOB, on Friday raised an alarm that the operatives of the Department of State Service, DSS, has allegedly refused the IPOB leader in the DSS detention facility to change his clothes despite subsisting court order mandating that Kanu should be allowed to change his clothes.

The IPOB lead counsel, Ifeanyi Ejiofor, stated this to newsmen in Owerri, after they had visited Kanu, at the DSS, Last Thursday. Ejiofor who described it as an obvious violation of court order also hinted that they had protested against such treatment.In his argument, the legal expert, said: “Extensive interaction was held with him on mainly legal issues, as well as other engaging related matters.

Though, for reasons we were not told, the officials of the DSS rejected for the umpteenth time, the change of clothes brought to him. “We, however, protested against this obvious violation of court order, and insisted on seeing the Head of the appropriate department to lodge our complaint, but Onyendu advised that we should take up the infractions at the appropriate forum in view of the fact that a positive order of court was flouted.

Also, forming part of our demand for explanations is the fact that some other guests that visited Onyendu were not hitherto cleared. Onyendu still insisted that this obvious infraction should be addressed at the appropriate forum because it constitutes a violation of positive order of the court.”

The visit proceeded smoothly and personal notes were taken of Onyendu’s erudite views/contributions towards a successful outing come 16th day of February, 2021.

Onyendu was equally briefed on the level of progress on other matters simultaneously going on in other courts affecting other young Igbo youths still in solitary confinement of the detaining authority, who are yet to be formally arraigned in court. Other details in relation to this brief shall remain private.”

“As usual, Onyendu appreciated his ardent supporters who have remained unshaken and resolute even in the face of obvious tribulations and sabotage. Please, be reassured that this month is a month of uncommon victory. Do not be distracted by the desperate contrive of the enemies of Umuchineke, which is now obviously coming in different dimension and being orchestrated by moles,” IPOB said.