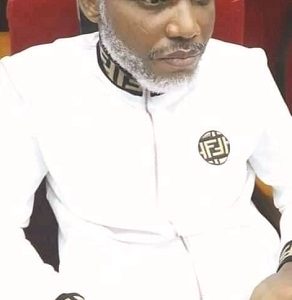 A Federal High Court in Abuja yesterday adjourned the trial of the Indigenous People of Biafra (IPOB) leader, Nnamdi Kanu, till November 10.

Trial Justice Binta Nyako fixed the date after the office of the Attorney-General of the Federation (AGF) informed the court that it had filed a fresh seven-count charge against Kanu.

After the fresh counts were read to him, Kanu pleaded not guilty. He also challenged the competence of the charge and the court’s jurisdiction to try the case in a fresh application.

Kanu, it was gathered, requested to be transferred to the Kuje Correctional Centre in the Federal Capital Territory (FCT). However, Justice Nyako declined and directed that three people of his choice should be allowed to visit him in the DSS custody on Thursdays.

The amended charge include secession threat, description of President Mohammadu Buhari as a terrorist and idiot; being member of IPOB and inciting IPOB members to kill security operatives. Kanu had been granted bail in April 2017 on health grounds. But, he skipped bail after flouting some of the conditions given to him by the court.IPOB was subsequently declared a terrorist group by the Federal Government.

He was arrested and returned to Nigeria from Kenya on June 20. On June 28 when he was taken to court by the DSS for his treason trial to continue, Justice Nyako ordered that he should be remanded in DSS custody.On July 26 when the case was to restart, the DSS failed to produce him.

Kanu, dressed in grey Fendi  attire,  entered  the court around 10am, guarded  by  the DSS.

Shortly after the proceedings, his lawyers took pictures with him.

His lead counsel, Ifeanyi Ejiofor, said he was challenging the court’s jurisdiction on the grounds that the alleged offences were committed in the United Kingdom and not in  Nigeria.

Before his arrival, there was pandemonium at the court’s entrance as lawyers clashed with DSS personnel for refusing them access into the premises.

Court officials were made to stand in queue and searched before being allowed into the court premises.

Some reporters who were allowed in did not go beyond the ground floor of the five-floor court building. The proceedings were held on the fifth floor.

Some security agents said they were instructed to prevent media coverage of the proceedings.

Prominent Nigerians, including a former Anambra State Governor Chukwuemeka Ezeife; leader of the Movement for the Actualisation of the Sovereign State of Biafra (MASSOB), Chief Ralph Uwazurike, and Senator Ifeanyi Uba (Anambra South) were also prevented from witnessing the proceedings.

Eziefe, who arrived at the court with Ejiofor, lamented that he could not see the IPOB leader after being left in the sun for hours.But, the former governor, who heads the Ohanaeze Ndigbo team monitoring the trial, said the development would herald the birth of a new Nigeria.Uba frowned at the way he was treated, arguing that as a senator, he ought to be allowed to witness the case.An activist, Deji Adeyanju, said: “At least, even under military rule, journalists would be given access to the courts. Members of the general public could also access the court. But today (yesterday) the reverse is the case.

It is most unfortunate and unbelievable that this is supposed to be a democracy.Ohanaeze Ndigbo said Kanu’s appearance in court amounted to the beginning of victory.“This is one step forward in Ohanaeze’s determined moves towards ensuring that the Afara Ukwu Prince is set free in no distant time,” its spokesman, Chiedozie Ogbonnia, said in a statement.The organisation urged youths in the Southeast to show restraints, prudence, and maturity in their legitimate demands for equity, justice, and fairness.

The statement reads in part: “The diplomatic engagements by Ohanaeze Ndigbo Worldwide has apparently yielded a positive result as the Federal Government has through the DSS bowed to the overwhelming demands of Ndigbo by producing Kanu in court.“We are unrelenting in our resolve to ensure that the government toes the path of wisdom by conceding to the proposal for ‘Dialogue and Alternative Dispute Resolution’ which will ensure the unconditional freedom of Mazi Kanu and all members of IPOB detained across Nigeria.”Demanding unconditional release of Kanu, IPOB said he has not “committed any crime to deserve persecution”It also asked the Federal Government to prepare a date for a referendum on Biafra.In a statement by its Media and Publicity Secretary, Emma Powerful, IPOB commended those that played various roles in ensuring that Kanu was produced in court.He said: “We wish to commend all the honorable men and women, including renowned groups in the world who lent their voices in advising Federal Government and the DSS to produce our leader Nnamdi Kanu today (yesterday) in court.

“Nigeria government should prepare a date for the referendum on Biafra. Those who want to sabotage Biafra freedom should wait for referendum date.”After the adjournment, Kanu’s supporters, who were also barred from the court premises burst into solidarity songs.An activist, Omoyele Sowore, was allegedly attacked by hoodlums.He was standing outside the court premises when the hoodlums swooped on him.DSS operatives warned the attackers to back off.Sowore explained why he was in the court.He said: “I am here to check the registry because for a while I have not been charged to court. I need to know about my treason case.“Also, I am here to witness the trial of my friend, Nnamdi Kanu.

The courtroom is incomplete, except the public observers watch and if it is a secrete trial, the public must know it‘s a secrete trial. You cannot have a secret trial in a public courtroom.”A shop, fully stocked with provisions, cosmetics, and household items, was yesterday morning set ablaze by hoodlums enforcing another sit-at-home order in Enugu State.The hoodlums also set ablaze a container truck conveying goods to Abakaliki, Ebonyi State in another at Eke Obinagu.The driver of the truck belonging to a popular transport company was said to have escaped unhurt.IPOB had threatened a one-month sit-at-home beginning from yesterday if Kanu was not produced in court.

The threat also made residents of Ebonyi, Abia, Anambra, and Imo states stay indoors to avoid being attacked by enforcers of the order.The owner of the shop in Ekeagu was said to have opened in defiance of the order when a group of youths arrived and set fire to it.Eyewitnesses said: “They dragged the shop owner out while one of them went to their vehicle to get petrol with which they set the shop ablaze. They also ensured that the fire totally gutted the shop and its contents”Banks, parks, schools major roads, and streets, including fuel stations, remained under lock and key in all the five Southeast states.