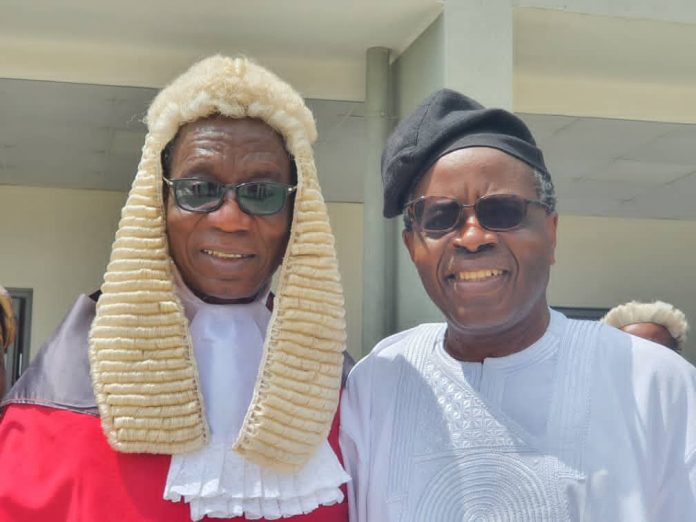 September 30, 2021 I was at a formal colourful ceremony that was similar to the pulling out parade that the military undertakes as any of their senior officers retire from service. Justice Solomon Abidoye Olugbemi took his formal bow out of the Ogun State Judiciary.

A Valedictory Court Sitting, was held in honour of an exceptional Nigerian. The Valedictory Court Sitting was presided over by the Honourable Chief Judge of Ogun State, Hon. Justice M.A. Dipeolu. This ceremony was to have taken place on April 2, 2020 when he actually attained the statutory age of sixty-five that is retirement for Judges in Nigeria with the exception of those on the Supreme Court who have an extra five years of service. We all remember that the world was in a lockdown. So, we could not gather for a ceremony as the world was in utmost fear of a pandemic that was claiming many lives.The exit of Judge Olugbemi, my unsung heroic friend was a triple event. Being a Pastor in the Baptist Church for a good portion of his life, a Thanksgiving Service was slotted into the programme as the Ceremonial Court became a Church and immediately after was used as the venue for the presentation of his book titled: Sweet Memories on the Bench.

The Reviewer of the Book, Prof. Idowu Adegbite, of Olabisi Onabanjo University provided a fifteen page review that wets the appetite of all in wanting to go further and appreciate selected judgements of Justice Olugbemi on the Bench. The reviewer concluded that Justice Olugbemi is cerebral and courageous among several attributes that he identified from the book.My first meeting with Justice Solomon Abidoye Olugbemi, I really do not remember. He was working at Olayide Adigun’s Chamber at 3, Oweh Street, Yaba, Lagos. I was Laide’s younger friend those days and stopped by at his Chambers to chat on national and local issues. I was an evening law student at the University of Lagos as I also taught Political Science at the same University at the time.

I enjoyed interactions with practicing lawyers. Precisely, the beginning of my close relationship with Justice Olugbemi was a decision I made in 1988. I had to provide an answer to my daughter Adeyinka Badejo wanting to know why she was not invited for the so-called Unity School’s Admission interview in 1988, when she scored higher marks than many, including those from Kano and Sokoto states with as low as 37.5% who were invited. In addition, in her class was a Minister’s daughter who scored 58.7% and was invited for the interview. She had scored 293 which was 73.25% but the Federal Government fixed 296 as cut-off mark for girls from Ogun State, as her “State of Origin”, in spite of the fact that she was not borne in or resided at any time in Ogun State beyond less than three or four day annual visits to her grand-parents as part of end of year family get together. I decided that I needed to have the Federal Government answer my daughter’s question by way of a suit. All my friends at Olayide Adigun’s Chambers chickened out of filing the suit on my behalf. This was after we had all discussed and agreed it was necessary to challenge the Federal Government using the court system for the correction of a patent discrimination that violates the Nigerian Constitution.

As I went into a melancholy state with no-one with capacity and my friends ready to step forward with me, I was pleasantly surprised when my mere acquaintance, Solo Olugbemi, announced he was ready to take the suit on. He was advised that he could do so under his name and not under the name of the Chambers. He agreed. We were advised at the Chambers to write our respective Wills. We all knew of the fact that the military junta that controlled Nigeria was not joking with anyone moving against its dictatorial order and control over Nigeria. If anyone was in doubt, the assassination of popular journalist, Dele Giwa on October 19, 1986 was enough lesson for Nigerians. Till today, no-one has been able to unravel who assassinated Dele Giwa but Gani Fawehinmi and co convinced Nigerians on the hands of the Babangida Administration.

We were not scared to pay the ultimate price for the realization of fundamental changes that people are clamouring for to date. We both had no property. But we proceeded to write our last Testament. Mine was giving ideas on what could be done in raising my children by my devoted wife who did not fuss over the pressures that I must not pursue a case in the name of our daughter, Adeyinka. Doye Olugbemi assisted me in ensuring that my handwritten Will complied with the law. He did not ask for a penny. I provided filing fees and thus began Adeyinka Badejo v. Federal Minister of Education as Suit No M/500/88 before Justice G.I. Akinboboye by way of an ex-parte motion on September 29, 1988. Of course, Justice Akinboboye, in an escapist manner stated that my daughter had no locus standi. My colleagues at the University of Lagos and other Nigerians started raising funds to support a just cause at the higher level. Joining this spirit, Pa Alfred Rewane requested to have late G.O.K. Ajayi, SAN, take over the case at his expense.

I agreed to the help on the condition that G.O.K would only be the lead Counsel and the late SAN agreed. Together, we pursued the case to the very end. Doye Olugbemi was the lone Counsel as the Supreme Court read its 3-2 judgement on case no. SC 196/1990, against us on September 20, 1996. Though the Supreme Court agreed with the Court of Appeal that Adeyinka Badejo had locus standi, it avoided a decision on Federal Character as discriminatory arguing that no more action was needed, given effluxion of time. Federal Character principle continues to under-develop Nigeria to date.With such a fighting spirit for what is just, little wonder that “my learned friend from before before”, as he now refers to me, Doye Olugbemi became my bosom friend who had and continues to have my utmost trust. For instance, as I left Nigeria to work for the United Nations, I did not hesitate to grant a Power of Attorney to him on all my affairs. In addition, I handed my commercial practice as a lawyer to him to help sort out. And he did not betray my trust.Thinking that I could pay back to the Nigerian society, I started funding a national Chess championship competition at the primary and secondary school levels which ran for a decade.

Doye Olugbemi, as he then was, organized this annual competition with gladness in support of the desire of a friend. I pulled out of doing so after my friend became a Judge. It became difficult to trust the arrangement in place in his absence. So, also did the judiciary rob me of the intimacy with my brother and friend in many other respects. For instance, he spoke Hausa very well. Annually, he used to accompany me to buy rams for my family yearly party. As a Judge, he gently told me that a Judge could no longer go into the market to negotiate prices of rams.I am pleased that, my Lord, Justice Olugbemi, held his head high as a Judge. He never received a query from the National Judicial Council.

Great that he did not bring his name into opprobrium and made people like myself, as friends, continue to be very proud of him. I am also glad he lived up to retirement in good health and wish him many more years in contributing towards the realization of a just society in our country.It has been my privilege and pleasure over the years sharing and discussing issues even beyond the legal profession with my friend, learned friend and Me Lord. He is a man of practical wisdom. I think the Nigerian judicial system owe Justice Olugbemi a great debt of gratitude for his distinguished services.

Babafemi A. Badejo, (Ph.D), is a Professor of Political Science/International Relations at Chrisland University, Abeokuta, Nigeria and former Deputy Special Representative of the UN Secretary-General for SomaliaEmail: ffembee@yahoo.com; +2348055331448