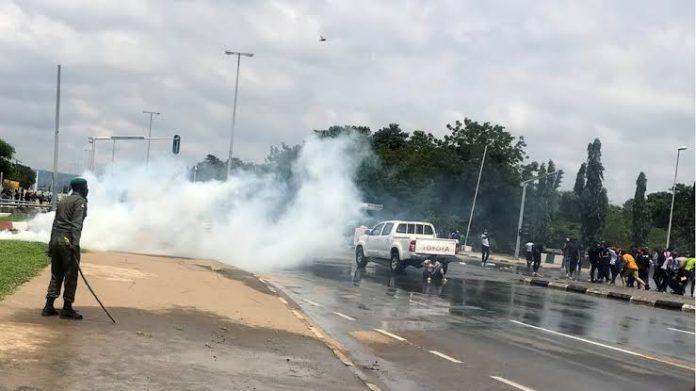 Officers of the Nigerian Police Force on Saturday shot teargas to disperse protesters in the Gudu area of Abuja as the country marked Democracy Day on June 12.

The June 12 protests organised by Omoyele Sowore is currently holding across some states in the country. POLITICS NIGERIA learned that Protesters had earlier blocked the Gudu Junction to protest the state of the nation.

The protest witnessed quite a big turnout as several people are seen carrying placards and banners with various inscriptions.

They demanded the resignation of President Muhammadu Buhari asking that he resigns from office as soon as possible. They claim that he has failed in addressing the challenges in the country, including that of insecurity.

Tension in Abuja over #BuhariMustGo protest at Dunamis church