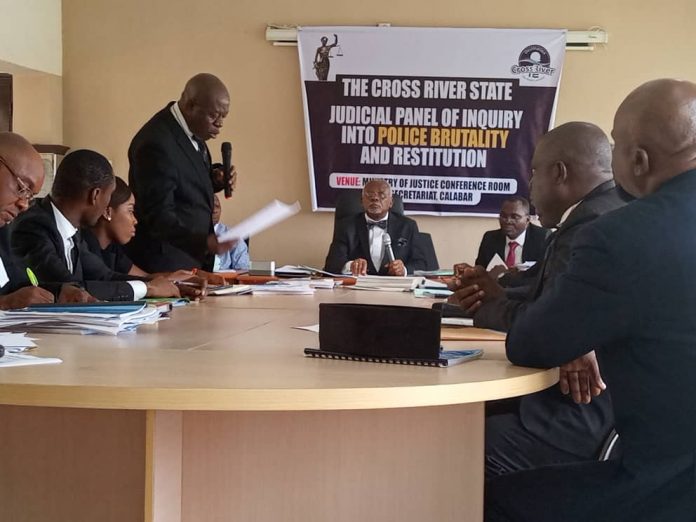 Judicial Panel: Give us Time to Pay Last Respect to Our Late Boss, Says Dennis Esq.

The leading counsel of the Police Legal team, Dennis Esqu,. has appealed to the Cross River State Judicial Panel on Police Brutality to grant time as they pay respect to the Late Cross River State Police Commissioner, Abudukadir Olanrewaju Jimoh.

About 11:05 am on Monday, 21st December 2020, the CRS Judicial Panel arose for its Judicial activities declaring the appearance of the petitioners and respondent’s. The leading Counsel to the Police Legal team Dennis Esq, swiftly prayed for discontinuation of the sitting.

Objecting that, the fatal incident which occurred on Thursday noon at the State CID, Police Head Division forefront is adjournment for the panel sitting.

Also, he imbue the panel of his inability to proceed for today’s schedule activities insinuating that, the ongoing events at the Police Head Quarter in Calabar, behest is presence.

He however pleaded with the panel for consideration so as to give all maximum respect and humility to the Late CP, Abudukadir Olanrewaju Jimoh. The Police Legal team testified that, the death of their boss “Jimoh” has caused heaped loss, emotionally and psychology to the Police Units and the Legal Department avouching that, the inconsolable shocked as impeded is emotional preparedness for today’s sitting.

Lamenting further, Dennis Esq., recounts to the panel the pitfall and damage’s that might occur if the panel decline is appeal and further proceed with the activities of the day. Leading the panel scripturally, Dennis stated that, “Mary mourned and was discomforted over the death of Jesus.” She followed the disciples to grant respect for her just beloved son.”

His emotive reference however compelled Justice Edem, to admit is appeal and the loss of the Police Superior while adjourning, the panel sitting to the 22nd of December 2020.

Nevertheless, He admonished the Police Legal team to brace up emotionally and psychological beforehand enunciating that, “the dead should bury the dead.”