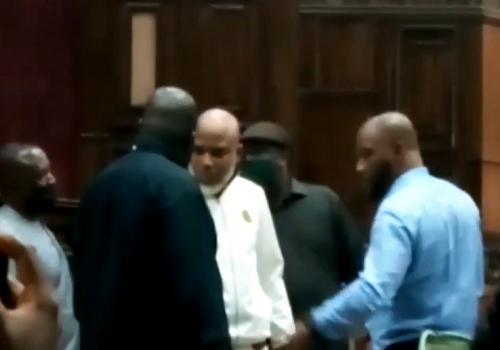 There was a mild drama at the Federal High Court in Abuja yesterday as lawyers of the Indigenous People of Biafra (IPOB) leader, Nnamdi Kanu, were locked out of the courtroom

Justice Binta Nyako expressed displeasure at the lawyers’ decision to walk out before the proceedings began, but the legal team said they were rather denied access.

They accused the judge of bias for conducting yesterday’s proceedings without them and threatened to report Nigeria to the International Court of Justice in the Hague.

Justice Nyako refused the prosecution’s prayer to consider Kanu’s application abandoned over his lawyers’ absence.Armed security operatives, drawn from the State Security Service (SSS) and the police, stormed the court premises as early as 6 am.

When proceedings commenced a little after 10 am, Kanu, who was brought into the courtroom around 9:52am, complained that security agents denied some of his lawyers, particularly Bruce Fein, from the United States, access to the courtroom.He told the court that Fein, who he said was handling a case for him in the US, was around to witness his trial.Kanu said: “I have an ongoing case in the US. I have not been allowed to see him. He is here to see me and to observe the proceedings.“He has been to the DSS to see me, but they denied him access to me,” Kanu said.At that point, the judge asked Kanu if he would conduct his case in the absence of his lawyers, to which he said no.

Lead prosecuting lawyer, Mohammed Abubakar, who is the Director of Public Prosecution, urged the court to proceed with the trial in the absence of Kanu’s lawyers.Abubakar contended that since Kanu’s lead counsel, Ejiofor, who was earlier granted access into the courtroom, walked out with his team shortly before the commencement of proceedings, they should blame themselves.He noted that ordinarily, the case was fixed for the hearing of an application filed by the defendant, adding that since the defence lawyers were absent, the court should deem the application abandoned.

Ruling, Justice Nyako frowned at the conduct of Kanu’s lawyers.She, however, rejected the prosecution’s application to deem the defence’s pending application abandoned.“Staging a walk out on the court is a very serious offence. I will not dismiss the applications. Let them be in the case file,” she said.Turning to Kanu in the dock, the judge said: “Discuss with your lawyers, so that their attitude can change.”On the defence’s complaint that Fein was denied access into the courtroom, the judge said individuals seeking to attend Kanu’s trial must write her court for consideration.Another foreigner, who claimed to be from the British High Commission, said she was in court to witness proceedings.She said she had the consent of the Chief Judge, Justice John Tsoho, to attend the proceedings.Justice Nyako said: “If you need to observe proceedings in my court, you must apply to me. But for the high respect I have for my Chief Judge, I will allow you for today.”The judge then adjourned further proceedings in the case till January 19 and 20 next year.

Ejiofor: We were locked out

Speaking with reporters after the proceedings, Ejiofor accused the judge of taking sides with the Nigerian government by conducting proceedings in their absence.

“It is now clear that the honourable trial judge is part of the prosecuting team. She will have to recuse herself,” he said.

Ejiofor described as strange, the decision by the judge to conduct proceedings while they were not in court.

He said over 50 lawyers, who were with them in solidarity and also part of their team, came to the court.

He, however, said though about eight of them, including his client’s American lawyer, had planned to enter the court, the security officers insisted only five would gain access.

“We are more than seven or eight of us here. We have people representing several groups in here who are lawyers.

“We have Nnamdi Kanu’s attorney from the US here also,” he said.

Ejiofor explained that while they were trying to sort out the issue with the DSS officers, the judge came in “and locked us out, all of us.”

He said Justice Nyako should have tried to inquire from the defence lawyers what really transpired.

“The attention was called to this that we are outside the court protesting about what they are doing to lawyers; they couldn’t allow us in,” he said.

He, however, said what transpired in court were yet to be made known to them before the court adjourned the matter.

“By virtue of what transpired today (yesterday), I don’t think we still have the confidence in the ability of the court to deliver justice in this case,” he said.

Fein, who is Kanu’s foreign lawyer, said it was disheartening that this would be the fifth he would be denied access into the courtroom to observe proceedings.

He threatened to drag Nigeria to the International Criminal Court (ICC) over alleged gross violation of his client’s rights.

“Today (yesterday) was the fifth time I was told I could not enter the courtroom despite the court’s previous order that Nnamdi could have access to any three persons he wants to.

“I had the chance to talk briefly to him on my way to the courtroom. It is clear that I am the target in particular. That’s the reason why this proceeding did not transpire today.

“And I’m here to tell Nigerians and the international community that I’m taking this to international tribunals. It is clear that the Nigerian tribunals are compromised.”

The lawyer said he will petition “the Working Group on Arbitrary Detention in Geneva, the International Court of Justice in the Hague, the ICC in the Hague…”

He added: “I’ll be going to the United States Congress and urging that sanctions be considered against Nigeria for gross violations of fundamental human rights.

“I’m here not to be an irritant but there are huge international law issues that are present in Nnamdi Kanu’s case.

“I’m here because I’m an international expert to provide more enlightenment on what legal issues are present here.”