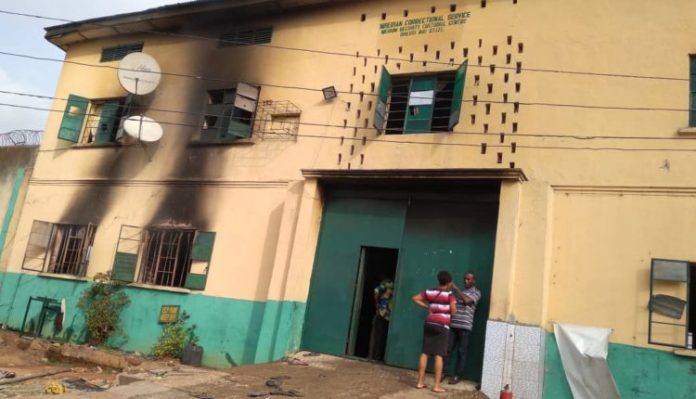 The Senate, on Tuesday, called for the establishment of special correctional centres for high-profile criminals following frequent jailbreaks witnessed across the country recently.

The Senate noted that out of the 252 escaped inmates in Jos Correctional Centre, 63 had been condemned to death while 181 were waiting trial. This, the upper chamber said, necessitated the need for the establishment of the special centre to house high-profile criminals with special security features. The Senate also expressed dismay over the Sunday attack despite the several security formations in Jos city centre where the correctional centre is located.

The Senate, therefore, mandated its Committee on Interior to carry out a full scale investigation into the causes of jail breaks across the country. Accordingly, the upper chamber resolved to summon the Minister of Interior, Mr Rauf Aregbesola, the Attorney-General of the Federation (AGF), Abubakar Malami, and the Comptroller-General of the Nigerian Correctional Service (NCoS), Haliru Nababa, to determine the status of correctional centres nationwide, with a view to finding out the challenges in order to prevent future recurrence.

These formed part of resolutions reached by the Senate following a motion brought to the floor by Senator Istifanus Gyang (PDP Plateau) during plenary. Senator Gyang, while coming under Order 42 and 52 of the Senate Rules to present his motion, noted with grief, the multiple terror attacks on two communities of Ta’egbe, Rigwe land and Durbi, Sheri District in a Bassa and Jos East Local Governments, leading to the death of over 10 persons over the weekend.

According to the lawmaker, the attacks caused by a security breach of the Jos Medium Security Correctional Centre was a setback to the relative peace in Plateau North. He disclosed that nine inmates, including an officer identified as Umar A. Mohammed, were killed, while 252 inmates escaped during the jailbreak. He said among the inmates at large, six were fatally injured, 10 of the escapees re-arrested, 63 sentenced to death, 27 convicted, and 181 awaiting trials.

Senator Gyang said that the invaders responsible for the break “walked through a security zone and broke through to have over 200 inmates escape from the Centre.” Contributing, Senator Ahmad Babba Kaita (Katsina North) blamed the spate of insecurity in Nigeria on the inadequate number of personnel across the various security agencies in the country.

He, therefore, called on the National Assembly to rise to the occasion by appropriating more funds to security agencies to enable them undertake recruitment of more personnel. The Senate Leader, Yahaya Abdullahi, attributed the recent jail breaks in the country to what he described as a “porous prisons system”.

He lamented that jailbreaks have become a recurring decimal which, in recent times have exposed the lives of Nigerians to harm, as a result of prisoners on the rampage to avenge their conviction. On his part, the Deputy Whip, Senator Aliyu Sabi Abdullahi described the string of jail-breaks across the country as “unfortunate”. He said the development which must be tackled headlong was a fallout of correctional services being the weakest link in Nigeria’s criminal justice system.

The Deputy Senate President, Ovie Omo-Agege, who presided over plenary on Tuesday, described the security breaches at correctional facilities as a “serious issue” that must be looked into. Omo-Agege also canvassed for more funding to the office of the National Security Adviser to facilitate intelligence gathering. Accordingly, the Senate in its resolutions called for a reinforcement of physical protection system and mechanism at correctional centres across the nation by the Ministry of Interior to forestall further attempts at jail breaks.

The chamber maintained that the attacks on Ta’egbe and Durbi communities in Plateau North and other communities across the nation requires more decisive and proactive measures by the Chief of Defence Staff and the Inspector General of Police, to secure law abiding citizens from incessant terror attacks, particularly now that the long awaited proscription of bandits as terrorists has been formalised by the Federal Government.

The Chamber also commended the Judiciary for the recent judgment by the Federal High Court declaring all bandits and insurgents as terrorists, adding that doing so has empowered the military to take appropriate action against them. It also mandated the Committee on Interior to invite the Minister of Interior, the Attorney General of the Federation and Comptroller General of the NCS, in order to carry out full scale investigation of the status of correctional centres nationwide, with a view to finding out the challenges to prevent future recurrence of jail breaks.

Meanwhile, the Comptroller General of NCoS, Haliru Nababa has declared that all inmates who escaped from Jos Custodial Centre on Sunday during a vicious attack by gunmen will be arrested even as he blamed lack of ade- quate funding to the inability of the service to deploy technology in manning its custodial centres nationwide.

The Comptroller General who spoke with newsmen through the Deputy Controller of Correction in charge of Operations, Mohammed Tukur in Jos said the assailants were able to penetrate the centre because of their number adding that some of the inmates escaped through the fence while others through the main entrance to the yard.

Because of the vibrancy of our men, they were able to stop every inmate from going out. We have the Police Headquarters, Police barracks situated at the frontage of the correctional Centre and Department of State Service (DSS) behind us. “All these people, including the military and Civil Defence, were here to help, and we are grateful. That is the essence of synergy,” he said. He reiterated that some of the inmates died through bullets wounds, while an armed guard lost his life adding that six of the inmates are presently receiving treatment in a hospital.

The Comptroller General who vowed to pursue and recapture all the inmates on the run said the search is already ongoing adding that sister security agencies are also helping towards recapturing those at large. According to him, “17 inmates, as of today had been recaptured; we hope that with the arrangements on the ground, we would be able to recapture a good number of them.” On the use of security camera to boost security arrangement in all centres across the country, the Comptroller General said, “We have Closed-Circuit Televisions (CCTV) in some of our Custodial Centres; however, CCTV can be provided according to the releases from the government.

If there are enough resources from the government, it will be provided in all centres but now, there is no way we can cover all centres with CCTV. “Even here, CCTV will be installed as soon as we get money but it is not automatic that every custodial centre will get CCTV at the same time, it is not possible.” Also, the NCoS said it has commenced investigation on the recent attack on the custodial centre.

Mr Mohammed Tukur, the Deputy Comptroller General of the service, in charge of operation, disclosed this on Tuesday in Jos while he was there to assess the level of damage caused by the attack at the centre. In a similar development, Lagos-based rights activist and lawyer, Ebun-Olu Adegboruwa (SAN), has urged the President and Commander in Chief, President Muhammadu Buhari, to get all security agencies to respect the rights of citizens and embrace appropriate rules of engagement in dealing with crisis situations.

Adegboruwa stated that there are too many cases of extrajudicial killings in the land presently, especially in places like the South-East where people are reported to be missing almost on a daily basis. “It came to light that at least eight of the inmates were killed while trying to escape. The Commandant said in an interview that they were gunned down while fleeing. The inmates were not the ones that attacked the facility but were most probably trying to take undue advantage of the opportunity of the attack to escape. That should not warrant their death,” he said. Adegboruwa added that the right to life is sacrosanct, both on the part of the warders and also the inmates, reiterating that no one should be killed extra judicially except and in accordance with a process sanctioned by law.