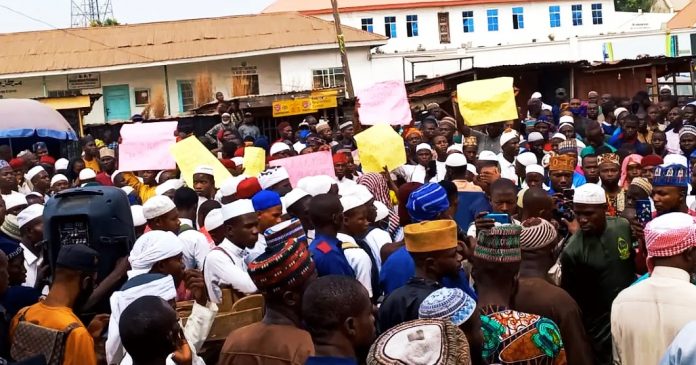 Muslims in Iwo thronged streets in the ancient town protesting allege imposition of some clerics as officials of the community central mosque.

The protesters comprising of men and women, majorly dressed in hijab, while some were in ‘purdah’, marched on the central mosque from different parts of the town with different placards, grounding vehicular movement for hours.

Led by the ‘Asiwaju Musulumi of Iwoland’ and the Chief Imam, Alhaji Liadi Tella and Sheikh, AbdulFatai Olododo among other leaders, they insisted that Chief Abiola Ogundokun lacked the authority to appoint officials for the Muslim community in the town.

Tella, while addressing the protesters said, “The attention of the generality of Muslims of Iwo, Osun State, Nigeria has been drawn to some announcements making the rounds and credited to a certain Chief Abiola Ogundokun, which purport to fill some non-existent vacancies in the Iwo Central Mosque, including stating the hierarchy of such positions. We hereby state that:

However, Shaikh Imran Adio, who was purportedly appointed as the Otun Ajanasi of Iwo, said, he and other officials were duly appointed.He made reference to the letter signed by Chief Ogundokun as Chairman, Board of Trustee, Iwo Central Mosque, where Adio and three others as officials of the mosque.