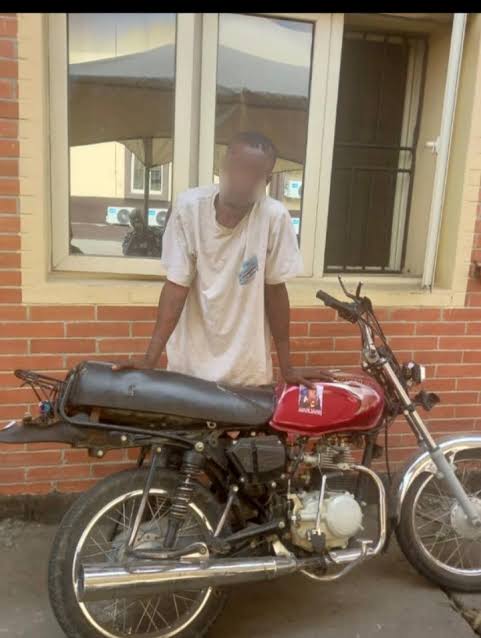 A suspected armed robber, Yusuf Lammeed, has confessed that he and his gang members who have been robbing unsuspecting members of the public in the early hours of the day across the tribunal and Abbey of Mushin in Lagos state have been into the business for over six months.

Lammeed further disclosed that although the ban on the operations of Okada in the State had made the business a lot more difficult, they still carried out operations at intervals to steal phones and sell to their dealers in Mushin popularly known as Segun Scatter, Steven Memory, Kalimantan and Ejo.

It was learned that Lammeed who is being investigated by operatives of the Lagos State Taskforce, was arrested while trying to rob a lady who stood at the bus stop at Ikeja Along waiting for a bus at about 5;30am on Friday.

The lady, who screamed for help when approached by the suspects alerted the officers on patrol along that axis which led to a hot pursuit where Lammeed fell from the bike and was apprehended.

Speaking on the arrest, The Chairman of the Agency CSP Shola Jejeloye said that the Agency would do all within its power to ensure that crime will continually be made to be unlucrative for anyone still involved in it.

“Crime is not a career. We have made several efforts in the past and will intensify the efforts to ensure criminal elements in the State either flee from here or turn over a new leaf. We will be all out in 2023 to achieve our mandate of zero tolerance to criminality in the State.”

Jejeloye urged miscreants, traffic offenders, environmental offenders, car snatchers, burglars, pickpockets, one-chance operators, etc to rethink this year or they will have themselves to blame at the end of the day. He appealed to residents to report any criminal activities around them to the nearest police Station or the Agency.

Jejeloye assured Lagosians that a crack team had been assigned to fish out the other gang members who fled the scene of the arrest and also apprehend the buyers of their loot. The suspect arrested will be charged in court accordingly.