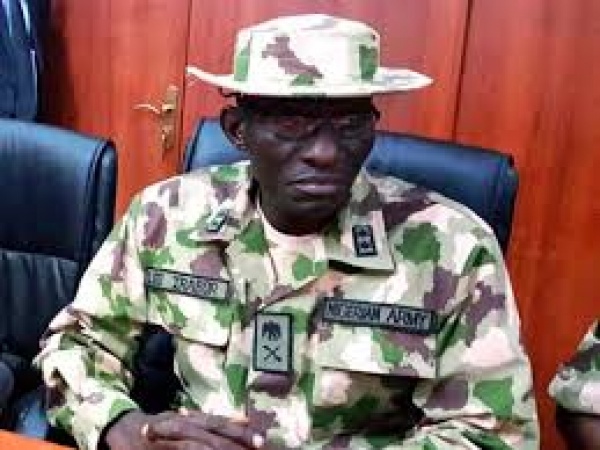 The Chief of Defence Staff (CDS), General Lucky Irabor, on Wednesday charged troops to be ruthless and more aggressive in dealing with unrepentant bandits in the North-west.

Irabor, in his maiden operational directive to the troops, since assumption of office ordered the troops to remain focused, committed and resolute in discharging their duties.

The order came just as troops eliminated 25 terrorists in a fierce encounter in the North-east following an earlier battle order issued by the Chief of Army Staff, Lt. Gen. Ibrahim Attahiru.

A statement yesterday by the Director, Defence Information, Brig.Gen. Onyema Nwachukwu, quoted the CDS as giving the directive when he led the service chiefs and other military chiefs on a visit to Operation Hadarin Daji in Zamfara State.

“He charged troops to be ruthless and more aggressive in decisively routing out unrepentant bandits and other criminals within the North-west zone, comprising Zamfara, Katsina, Sokoto and Kebbi States,” the statement said.

It said the purpose of the visit was to assess the ongoing military operation in the state, and to appraise the combat and operational readiness of troops in the area.

Irabor pledged the support of the service chiefs to enhancing the fighting capabilities and efficiency of the troops.

He also assured them of improved welfare and prompt resolution of administrative challenges bedeviling the operation.

On arrival at the Force Headquarters (OPHD), Gusau, the CDS and the service chiefs were briefed on operational activities and achievements of the operation by the Force Commander, Maj. Gen. Aminu Bande.

Irabor in his address to the troops commended the officers and men of OPHD for their concerted efforts and urged them not to relent in giving their best to ensure the return of lasting peace to Zamfara State in particular, and the North-west zone in general.

The CDS and service chiefs thereafter paid a courtesy visit to the Governor of Zamfara State, Mr. Bello Mattawale, at the Government House, Gusau.

While receiving the CDS, the governor made a case for the provision of more modern war hardware for the security agencies in the state.

This, he said, would help contain the insecurity confronting not only Zamfara State but the country.

The governor enjoined the military to clear all the bandits’ camps in the state, stressing that this will help in eliminating them.

The CDS assured the governor and Nigerians of the determination of the Armed Forces of Nigeria and other security agencies, in dealing with criminal elements.

A statement by the Director of Army Public Relations, Brig. Gen. Mohammed Yerima, said following the directive of the army chief, troops have continued to clear all villages and enclaves hitherto inhabited by the Boko Haram Terrorists (BHTs) and their Islamic State West Africa Province (ISWAP) around Chikun Gudu, Kerenoa axis and environs in the ongoing Phase II of Operation “Turai Takaibango.”

It said the clearance onslaught was based on the directives given by Attahiru when he visited Operation Lafiya Dole.

It added that during his operational visit to Dikwa, the COAS directed troops to recapture Marte and to clear other adjoining villages which include Chikun Gudu, Kerenoa and the environs.

He said: “Following the directive, the gallant troops moved in, achieved the objective and projected ahead. In the course of the clearance operation, troops encountered heavy fleets of the terrorists, engaged and ultimately obliterated them.

“In the encounter, 25 members of the terrorist group were neutralised while the following weapons were captured, including two brawny machine gun, 20 AK 47 rifles and 5 FN rifles, 2 60mm mortar tube and two General Purpose Machine Guns (GPMG).

“Other weapons captured during the operation also include three anti-aircraft guns, two automatic grenade launchers, two gun trucks and one CJTF Hilux amongst others.:

He said the COAS commended the gallant troops and charged them to maintain the momentum in order to ensure that the area is completely cleared and dominated.

“He also instructed them not relent in their new offensive,” he said