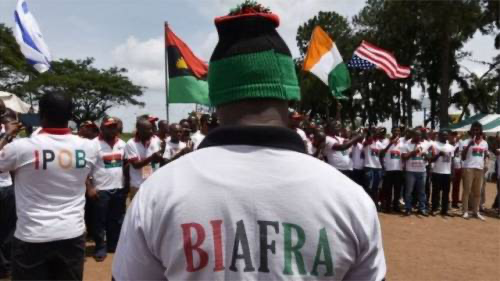 Secessionist group, the Indigenous People of Biafra (IPOB) has distanced itself from Okechukwu Nlebedum.

The IPOB distanced itself from Nlebedum, popularly known as Ejima, who confessed to being a member of the Eastern Security Network (ESN) when he was recently arrested by Nigeria’s secret police, the Department of State Services (DSS).

ESN is the militant wing of the separatist group IPOB.

Arrested for allegedly masterminding attacks on offices of the Independent National Electoral Commission (INEC) in the state, Ejima confessed that he was the Njaba Division Commander of the ESN in Imo State.

He identified ESN sponsors to include Chinasa Nworu and Okey Foreign, both based overseas and one Vitalis Anwunaezi from Budomu village in Imo.

Reacting to Ejima’s arrest and his confession, IPOB in a statement by its Media and Publicity Secretary, Emma Powerful, distanced itself from the suspect.

It said Ejima and the people he mentioned including Number 1 and Temple are vicious criminals who were recruited by Imo State Government to blackmail the group and ESN in the Southeast region.

IPOB said, “For record purposes, Ejima is never an ESN commander rather he is among those Orlu youths using the name of ESN to carry out some intimidation and harassment of their own people and he was warned several times and was asked to undergo ESN training and stop working in the name of ESN, also he was asked that he must undertake an oath to be discipline and law abiding volunteers and he must not engage in criminality, kidnapping or other illegal activities in the name of ESN which he refused to take the oath till his present ordeal.

“Furthermore, people should recall that IPOB leadership through Mazi Chinasa Nworu in one of his broadcasts earlier this year mentioned the names of these criminals on Radio Biafra as those terrorising the Orlu East and Orlu West LGA of Imo State.

“Chinasa Nworu specifically said that they are criminals and not working for IPOB nor ESN. Also IPOB Media and Publicity Secretary, Comrade Emma Powerful in one of his previous press releases warned these criminals to stop their atrocities and refrain from impersonating IPOB and ESN.

“Ejima whose real names are (sic) Okechukwu Nlebedum is Governor Hope Uzodinma’s blood relative from his mother’s side according to Ejima and he knew Hope Uzodinma and Hope knew the activities of Ejima and his twin brother whom they paraded together.

“Both of them that were paraded have been working with Hope Uzodinma from the time Hope Uzodinma was a senator till they fell out after he became the Governor.

Hope Uzodinma made many promises to Ejima through the Njaba LGA chairman, Hon. Vincent offered cash and amnesty in order to reconcile with Ejima and to work with his government, he recruited him and his gang to continue impersonating IPOB and ESN for blackmail and propaganda. These guys are working with the Government as double agents and we refer to them as infiltrators.

“Let’s analyze vital portion of Ejima’s public confession. When he was asked by the Journalists about the location of their camp, he said ” …at the back of the police station…”

“Important Question: Can ESN under IPOB operate a camp at the back of Nigeria Police Station without being invaded by the same Police who always claim to be raiding ESN camps? The camp in question behind the police station is Hope Uzodinma’s fake ESN camp where Ejima is their commander.

“They thought that the stage is now right to stage-manage a coordinated blackmail against Chinasa Nworu, ESN, IPOB and in fact MNK using Ejima. But we will continue to expose their lies and blackmail. IPOB doesn’t work with criminals.”

IPOB insisted that it does not support evil activities like kidnapping, killing and carjacking but that its mission is to protect the people and not to make life difficult for them.

According to IPOB, Ejima and his gang will face the consequences of the crime they committed against innocent citizens if the government will prosecute him ‘because he is working with them against ESN’.

“Let it be on record that IPOB and ESN are innocent. The so-called Ejima and his gang are not ESN operatives nor IPOB volunteers.

“We challenge the Nigeria Police and Imo State to charge Ejima to an open court where lawyers can ask him questions,” IPOB said.