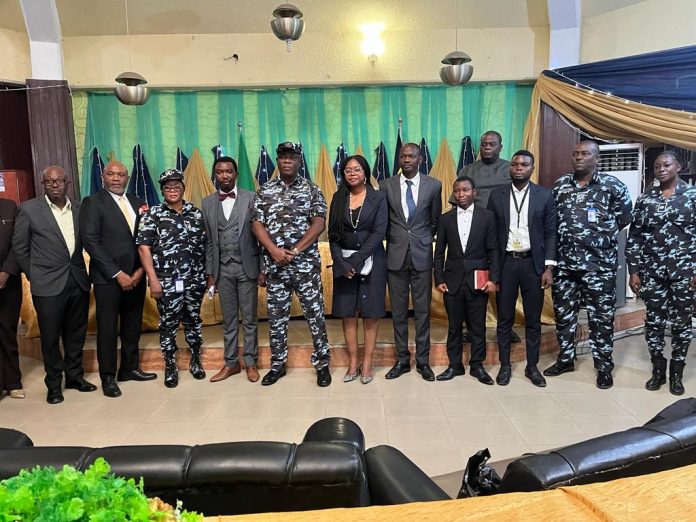 Where does the protection of fundamental human rights begin, and the need to ensure law and order in society begin? Are these two mutually exclusive, or are they complementary? Should the average Nigerian citizen have to choose between security and fundamental liberties – or can he or she have both?

NEWSWIRE Law & Events Magazine correspondent in Lagos reports that the Conference Hall of the Nigeria Police Force Headquarters, Zone 2 Command at Onikan, Lagos Island was abuzz with anticipation on Friday, December 2, 2022, thanks to the nature of the subject about to be discussed between the top echelon of the police and the leadership of the Human Rights Committee of the Nigerian Bar Association, Lagos Branch.

Led by Mrs. Abiye Tam-George, Vice-Chairman of NBA Lagos Branch and Chair of its Human Rights Committee, the lawyers slated this important activity to mark the 2022 International Human Rights Day, a global celebration which will culminate on December 13.

Welcoming participants to the session, Mrs. Tam-George described the Dialogue (which was anchored by Olanrewaju Obadina, the Alternate Chairman of the Human Rights Committee of the NBA Lagos Branch, and SP Aremu, the Public Relations Office of the Zone 2 Command) as an attempt to engender a saner society, one which is characterized by trust in our policing system on the part of the general public. Lamenting the fact that the relationship between lawyers and police officers has in some instances been adversarial, she said it ought to be complementary instead, seeing that both police officers and lawyers are servants of the law, devoted to preventing or prosecuting crimes and misdemeanours, and ensuring the good ordering of a just and equitable society. She also touched on often-repeated charges (by lawyers) of overzealousness on the part of some police officers, and charges (by police) of unruliness and arrogance on the part of lawyers, saying such incidences were inimical to the quest for justice in our society. Human rights, she added, are not just about the general public, but also about the welfare of police officers and the enhancement of their conditions of service.

Also welcoming attendees on behalf of the NPF Zone 2 Command, DCP Umar Shelleng said the police derives its powers and responsibilities from the Constitution of the Federal Republic of Nigeria, as well as other statutes including the Police Act – meaning that the Police, like all other citizens, was under obligation to respect the law of the land, including the fundamental rights of fellow citizens. But to fulfil its obligations, he emphasized that the police needs lawyers by its side – not in its way, as is often the case.

According to NEWSWIRE’s correspondent, the session featured a robust exchange of views, ideas and concerns around the issue of human rights, namely, how to protect and sustain them vis-a-viz the constitutional obligations of the police. Among those who made presentations and important contributions to the discourse were Mrs. Tam-George, AIG Adeleke, Officers in Charge (OCs) of the Legal and Human Rights Units in the Lagos and Ogun State Police Commands as well as their counterparts at the Zone 2 Command.

In the course of the discourse, the following issues were addressed along with recommendations:

At the end of the discourse, AIG Adeleke gave his approval for the formation of a 10-man Committee (comprising 5 senior police officers namely, the 3 OCs of the respective Legal Units and 2 OCs of Human Rights at the Lagos and Ogun State Police Commands) and 5 lawyers from the Human Rights Committee of the NBA Lagos Branch.

The Engagement Dialogue came to a close with a vote of thanks by Barr. James Sonde.