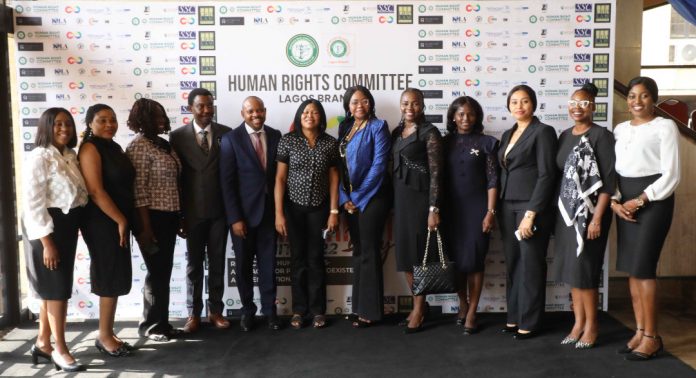 The cavernous interior of the Agip Hall at the MUSON Centre in Lagos Island was the venue of the 2022 Annual Human Rights Summit. The event, which was organised by the Human Rights Committee of the Nigerian Bar Association’s Lagos Branch and anchored by the duo of Derinsola Fagbure and Olanrewaju Obadina, was in commemoration of this year’s International Human Rights Day, and its theme was: “Respect for Human Rights: A Panacea for Peaceful Co-existence and Generational Equity.’ The event was graced by members of the Bar at various levels of post-call experience, as well as the Bench. The traditional institution in Etiosa Local Government Area of Lagos State was also well represented, as was the Lagos State House of Assembly in the person of Hon. Victor Akande, Chairman of its Judiciary Committee (who came on behalf of the Speaker, Rt. Hon. Dr. Mudasiru Obasa).

On December 13 of every year, the international community, under the purview of the United Nations (UN) embarks on activities and programmes to mark the actualisation of one of the most important milestones in mankind’s long history of struggle against injustice and the fight to preserve the dignity of the human person. Signed in the immediate aftermath of the Second World War, the UN’s Universal Declaration of Human Rights seeks to push back against all forms of dehumanisation – be it slavery in all its dimensions, the denial of basic liberties, a degradation of human worth, denial of opportunities in education and employment on the basis of race, national origin, ethnicity, religion, gender, etc. Over the years, a number of regional, national and sub-national jurisdictions around the world have ratified and domesticated the provisions of the Declaration. An example is the African Charter of Human and People’s Rights, among others.
Though much progress has been made in the protection of human rights around the world, violations and other challenges still exist. The degree and severity of these violations differ from entity to entity. In Nigeria, violations of human and people’s rights are not only severe, but they happen on a routine basis, even in the face of efforts by government agencies such as the National Human Rights Commission, civil society organizations, professional bodies such as the NBA as well as lawyers, among others, to eliminate the scourge or reduce it to the barest minimum.

In his welcoming remarks, the Chairman of the NBA Lagos Branch, Ikechukwu Uwanna, described the work of the Branch’s Human Rights Committee as a pivotal aspect of its mandate – juat as the protection of fundamental human rights is essential to the good ordering of a civilized society. Lamenting the limited traction the subject of human rights continues to receive in recent years, Uwanna said the leadership of the Branch would nevertheless continue to support the Human Rights Committee in all its laudable programmes.

NEWSWIRE Law and Events Magazine ‘s correspondent in Lagos reports that the Keynote Address at the occasion was delivered by Prof. Akinola Ibidapo-Obe of the Faculty of Law at the University of Lagos. The professor, who participated virtually from faraway Canada, chose to speak on the topic: ‘Human Rights Activist Lawyers – A Dying Breed?’ The choice of topic, Prof. Ibidapo-Obe explained, was necessitated by the need for the legal profession to take an introspective look at its record on human rights activism since the advent of civil governance in Nigeria in 1999, with a view to comparing its intensity with what obtained earlier. He decried what he called the unfortunate notion among lawyers and other civil society players that having seen off the military from political power (and the egregious abuses they committed in the exercise of that power) there was no longer any need to exert the same level of energy in human rights advocacy with the coming of democratic rule. Far from having ended with the departure of the military, he said, serious and widespread violations of human rights are still going on – a situation which, he said, has lent credence to the famous truism that ‘the price of freedom is eternal vigilance.’ Events since 1999, he said, have shown that democracy is not an end in itself, and lawyers must continue to be advocates and avatars of human rights.
Himself a veteran of many human rights campaigns over the decades, Prof. Ibidapo-Obe went on to give an overview of the history and evolution of human rights, and the struggle to protect it in the face of the oppression and dehunisation of individuals and groups – from the civilisations of ancient Egypt (or Kemet, as he preferred to call it); to ancient Greece and the philosophical musings, writings and teachings of Aristotle and Plato, as well as Socrates (whom he cited as the first notable person in recorded history to be sentenced to death for his thoughts on human rights); to the writings of modern thinkers such as St. Augustine (whose epochal work, ‘The City of God’ highlighted the racial component of human rights), as well as Thomas Aquinas and St. Gregory; to the signing of the UN Charter and the afore-mentioned Universal Declaration of Human Rights; to the regionalization and localisation of human rights protocols in various national and sub-national jurisdictions around the globe.

According to Prof. Ibidapo-Obe, there are 5 generational matrix of human rights, namely, civil and political rights; economic and socio-cultural rights; group rights (ie to do with ethnic and religious minorities, women, people with disability, etc.); environmental rights; and rights associated with democracy and good governance. Time there was, he said, when lawyers were at the forefront of the struggle for the defence of the above listed rights. He paid tribute to a generation of activist lawyers, among them Alao Aka-Bashorin, Olisa Agbakoba, Clement Nwankwo, Tunde Fapohunda and others – and the organizations they founded as platforms for the struggle for human rights, such as the Civil Liberties Organization (CLO), the Committee for the Defence of Human Rights (CDHR), the Constitutional Rights Project (CRP), the Media Rights Agenda (MRA), etc. He also saluted the legacies of ‘activist Judges’ such as their lordships, Justices Kayode Eso, Chukwudifu Oputa and Akinola Aguda, to name a few, whom he praised for their sensitivity to the primacy of human rights in their judgments, pronouncements and rulings. The erudite professor also lauded international organizations such as Amnesty International and Ford Foundation for their respective roles in catalysing the internal campaigns in Nigeria through exposure and funding.

The Keynote Speaker ended his speech by calling for an increase in human rights education in Nigerian institutions of learning. In particular, he said, there is the need to make Human Rights a compulsory course in our universities, in a bid to re-engage the coming generations on the primacy of human rights as an indispensable component of democracy.

Also speaking, the Vice-Chairman of the NBA Lagos Branch and Chairman of its Human Rights Committee, Mrs. Abiye Tam-George, agreed with Prof. Ibidapo-Obe’s perception of activist lawyers as a dying breed, adding that the legal profession in general, was in denial of this fact. The purpose of the Summit, she said, was to change this narrative of decline and bring about actionable outcomes, going forward. Recalling an earlier engagement between her Committee and senior members of the Nigeria Police Force about a week earlier, as well as with traditional rulers, Tam-George added her voice to Prof. Ibidapo-Obe’s call for a more robust engagement on the part of lawyers in the protection of human rights in our society.

According to NEWSWIRE’s correspondent, a major highlight of the Summit was the panel discussion, which featured individual presentations by the following: Hon. Justice Taiwo O. Taiwo (retired) of the Federal High Court (himself a one-time Chairman of the NBA Lagos Branch before his ascension to the Bench); Dr. Joe Okei-Odumakin, a noted human rights, gender and child rights activist; Ebun-Olu Adegboruwa, SAN; Kolade Olawuni (a partner at the law firm of Babalakin and Company); and Chukwuka Ikwuazom, SAN (a partner at the firm of Aluko & Oyebode and a former Chairman of the NBA Lagos Branch).

In their respective presentations, each panelist gave a critical insight into various aspects of human rights, violations thereof and remedies. While Justice Taiwo – an ‘activist judge’ in his own right – proposed a jurisprudence that accords primacy to human rights (citing many instances of his own judgments and rulings to that effect),, Dr. Odumakin spoke on how a greater awareness of human rights in Nigeria can help shape our morality in general. Speaking on her organisation’s travails over the years in the trenches, she expressed satisfaction at the progress so far made on behalf of women, children and people with disability.She ended with a moving tribute to her late husband, Yinka Odumakin, a tireless advocate of institutional reform and a believer in national restructuring as the only path to national revival, who until his demise in 2021 was the spokesperson for the Yoruba socio-cultural group, Afenifere. Adegboruwa, who spoke on the topic ‘Rethinking Sustainable Protocols: A Victim’s Perspective,’ described the current human rights environment in Nigeria as not only a decline but an eclipse, saying the present political regime has taken the country two decades backwards in this respect. While asserting that law must be used for social engineering and for the betterment of the lot of the masses, he called for damages in cases of rights violations to be not only punitive and aggravated, but PERSONAL in order to discourage future infringements. Adegboruwa ended by calling for an immediate repeal of certain sections of the Fundamental Rights Enforcement Procedure Rules, which he described as a throwback to colonial times and having no place in a democracy. On his part, Olawuni echoed Adegboruwa’s call for the system to go for the financial ‘jugular’ of rights violators and oppressors, while also instituting a range of protections – including privacy from exposure – for victims. The final presentation of the day was by Ikwuazom, who spoke on the topic, ‘Critical Turning Points: Ethical Conduct by Professionals in the Administration of Criminal Justice.’ He called for the restoration of presently-declining standards on the part of lawyers in the areas of grooming, demeanour, accountability and emotional intelligence. Lawyers, he asserted in conclusion, must BE the change they wished to effect in the society, including in the defence of fundamental human rights.

Another highlight of the Summit was the presentation of Award plaques to the distinguished panelists, and to the Speaker of the the Lagos Assembly, for their contributions to the success of the Summit, and to the cause of human rights as a whole. The Award for the Keynote Speaker, Prof. Ibidapo-Obe was received on his behalf.

The 2022 Human Rights Summit came to a close with a vote of thanks by a member of the NBA Lagos Human Rights Committee, Queen Oniwon, who, while admitting to Prof. Ibidapo-Obe’s characterisation of a ‘dying’ breed of rights activists, nevertheless foresaw an imminent ‘resurrection’ and regeneration in the ranks and fortunes of the human rights community in Nigeria.