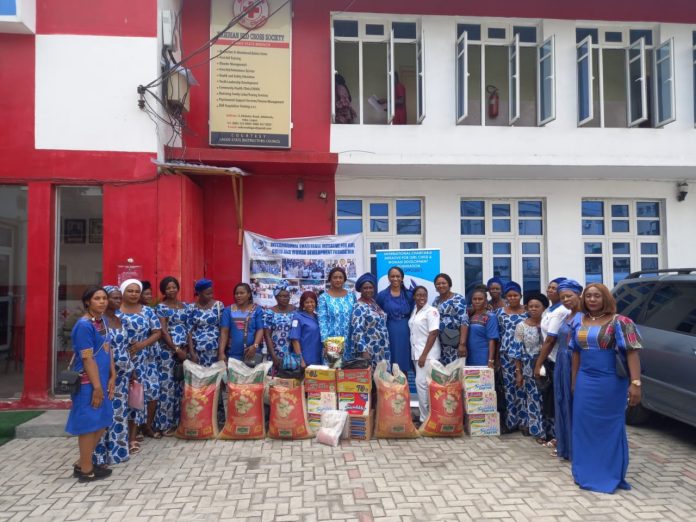 A non-governmental organization, The International Charitable Initiative for Girl Child and Women Development Foundation (ICI-GWODEF) was at the headquarters of the Nigerian Red Cross Society in the Makoko district of Lagos on Friday, October 8, 2021 to distribute food items to young orphans at the institution’s orphanage, as well as to enhance public awareness on the plight of the Girl-Child in Nigeria in the run-up to the 2021 commemoration of the International Day of the Girl-Child.

Speaking to NEWSWIRE Law and Events magazine at the event, the President of the group, Barrister (Mrs.) Helen Nchedo Ibeji described the Nigerian Girl-Child as an endangered species.

The vulnerability of this precious but often dehumanized demographic group is an unrelenting reality, she added, especially in times of conflict, political crisis and social instability – during which crimes such as abductions, rapes and other acts of gender-based violence are at their peak. Even in times of relative peace, she asserted, practices such as early marriage, denial of access to education, domestic violence and abuse, as well as discrimination and unlawful incarceration are the order of the day. Barrister (Mrs.) Ibeji called on the relevant stakeholders to facilitate the urgent implementation of laws designed to protect the Girl-Child from these abuses. Since its inception in 2011, ICI-GWODEF has embarked on intensive interventions on a number of levels, including advocacy (notably in the form of free legal representation on behalf of victims of abuse); prison visits and calls for penal reform; distribution of relief materials; and enlightenment campaigns, among others.

While praising the effective synergy the organization currently enjoys with both public and private sector stakeholders such as the Lagos State Ministry of Women’s Affairs as well as the State AIDS Control Agency in the area of HIV testing and counselling, she lamented the challenges which still militate against the welfare and restoration of the rights and dignity of the Girl-Child in Nigeria. She listed these challenges to include inadequate funding as well as cultural and institutional pushback against pro-girl-child advocacy.

The culture of silence and non-reporting of abuses by victims and witnesses of gender-based violence makes society as a whole liable in these abuses, the ICI-GWODEF president said and called on faith-based organizations in their role as moral guardians to lead the charge in this regard; in particular she singled out Bishop Matthew Hassan Kukah, the Catholic archbishop of Sokoto diocese, as an example worthy of emulation on account of his vocal advocacy on this issue. Mrs. Ibeji also decried the practice by law enforcement agencies to either blame the victims of abuse or dismiss their complaints as purely domestic affairs. She therefore called for a renewed engagement among stakeholders in the form of greater funding (especially for legal fees, lawyers remuneration and relief materials); the active cooperation of the law enforcement agencies in the investigation and prosecution of cases of violence and abuse against Girl-Children; and a commitment by society as a whole, including their political representatives, to get rid of this social menace through political action.

On her organisation’s projections, Mrs. Ibeji expressed the hope that ICI-GWODEF would, in no distant future, be able to set up a Girl-Child Centre which would serve as a resource and legal aid centre to resolve conflicts and address relevant complaints. Other officials of ICI-GWODEF, such as the vice-president, Barrister Ify Uzokwe, Barrister Nkechi Onyeukwu-Onyenso, who also serves as the managing director of Pathfinders International Limited, and the organization’s media partner, Gloria Ireka, Esq. also echoed the president’s remarks. The International Day of the Girl-Child was set aside by the United Nations to celebrate the unique virtues of girls and draw global attention to issues around their welfare, fundamental human rights and dignity.

Other activities during ICI-GWODEF’s visit to the Nigerian Red Cross Society’s orphanage included group photographs with the children, and the cutting of a special cake to commemorate the Day.